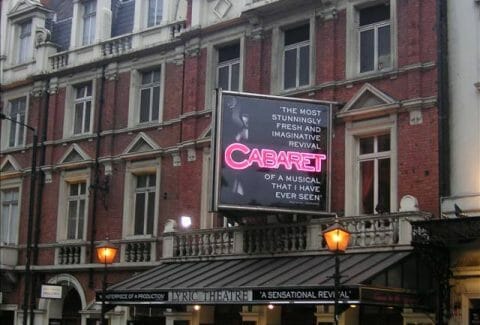 The Lyric Theatre is the oldest surviving of all the theatres currently on Shaftesbury Avenue. The foyers and bar areas were completely redecorated in 1932/33 while the exterior was restored in 1994.

The Lyric Theatre initially staged mostly light operettas when it first opened before subsequently staging light comedies and straight drama. In 1950 Andre Roussin's The Little Hut ran for 1,261 performances with Robert Morley in the first cast. 1972 saw Alan Ayckbourn's How the Other Half Loves run for 869 performances. More recently Five Guys Named Moe, a musical based on the songs of Louis Jordan, had a very successful run here – opening 14 December 1990 and running until March 1995.

The Lyric Theatre is the oldest West End theatre on Shaftesbury Avenue, having opened in December 1888. Designed by architect C J Phipps, it was originally built for impresario Henry J Leslie as a home for operetta. Since then the building has successfully hosted drama, comedy and musicals and some highlights of its rich history are listed below.