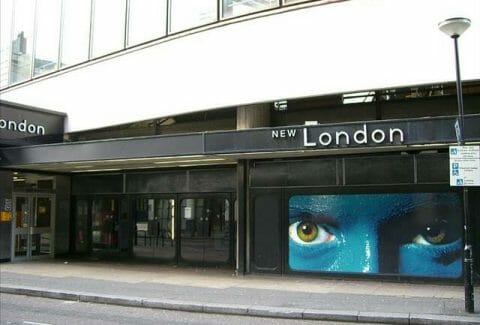 Gillian Lynne Theatre (formerly the New London Theatre) is a West End theatre located on the corner of Drury Lane and Parker Street in Covent Garden, in the London Borough of Camden. The current theatre was designed by Paul Tvrtkovic and seats 960 on 2 levels, the building also contains an underground car park, a cabaret venue, a basement nightclub, shops and a residential tower.

The modern theatre is built on the site of previous taverns and music hall theatres, where a place of entertainment has been located site since Elizabethan times. Nell Gwynn was associated with the tavern, which became known as the Great Mogul by the end of the 17th century, and presented entertainments in an adjoining hall, including “glee clubs” and “sing-songs”. The Mogul Saloon was built on the site in 1847, which was sometimes known as the “Turkish Saloon or the “Mogul Music Hall.” In 1851, it became the Middlesex Music Hall, known as The Old Mo. This in turn was rebuilt as the New Middlesex Theatre of Varieties, in 1911 by Frank Matcham for Oswald Stoll.

The Vagabond King was produced at Gillian Lynne Theatre (formerly the New London Theatre), then still the Winter Garden, in 1927, and in 1929, Fred and Adele Astaire starred in Funny Face. In 1930, Sophie Tucker played in the Vivian Ellis musical Follow a Star, and in 1923, Gracie Fields appeared here in Walk This Way. In 1933, the theatre hosted Lewis Casson in George Bernard Shaw’s On the Rocks, followed in 1935 by Love on the Dole, starring Wendy Hiller. The theatre closed in the late 1930s, reopening in 1942. In 1945, it hosted a Donald Wolfit season, and in 1953, Agatha Christie’s Witness for the Prosecution played. 1956 saw The Water Gypsies by Vivian Ellis and A P Herbert; Hotel Paradiso starring Alec Guinness, Douglas Byng, Irene Worth and Billie Whitelaw; and Tyrone Power starred in Shaw’s The Devil Disciple. 1958 included The Iceman Cometh.

The theatre closed permanently in 1959 when it was sold by the Rank Organisation to a developer. It was then gutted and remained vacant until 1965 to be replaced in 1973 by the current building and rechristened as the current Gillian Lynne Theatre

The theatre’s auditorium first opened with a television recording of Marlene Dietrich’s one-woman show. The theatre officially opened on January 2, 1973 with a production of The Unknown Soldier and His Wife starring Peter Ustinov. It then hosted Grease, starring Richard Gere as Danny. Beginning in 1977, the theatre was used as a television studio for several years before returning to use as a theatre. Gillian Lynne Theatre’s biggest hit was the Andrew Lloyd Webber and Trevor Nunn musical Cats, which premièred in the theatre on 11 May 1981. Closing in 2002, this production became the longest running musical in West End history, stretching the availability of the Gillian Lynne Theatre tickets to its limit with sellout shows during its long run.

The theatre hosted the 1977 BBC Sports Personality of the Year and the Masters snooker between 1976 and 1978. Also in 1977, the theatre hosted the BBC’s A Song For Europe contest, the preliminary heat to choose the UK entry for the Eurovision Song Contest. However, the show was blacked out on TV due to a last minute strike by technicians.

Even the famous video clip for the song We Are The Champions by the band Queen was shot in Gillian Lynne Theater on October 1977, which folowed a minor 70-min. concert.

Between 2003 and 2005 the theatre hosted Bill Kenwright’s revival of Andrew Lloyd Webber’s musical, Joseph and the Amazing Technicolor Dreamcoat. This closed after a two and a half year run on 3 September 2005. Gillian Lynne Theatre also played host to the London transfer of the off-Broadway production, Blue Man Group, which closed in June 2007, to make way for the Royal Shakespeare Company’s repertory productions of The Seagull and King Lear, starring Ian McKellen. In Spring 2008, a new musical adaptation of Gone With The Wind ran for only two month. New musical Imagine This closed after only being open for one month. The current production is a transfer of the National Theatre’s War Horse. The theatre has been owned since 1991 by Lloyd Webber’s Really Useful Theatres.