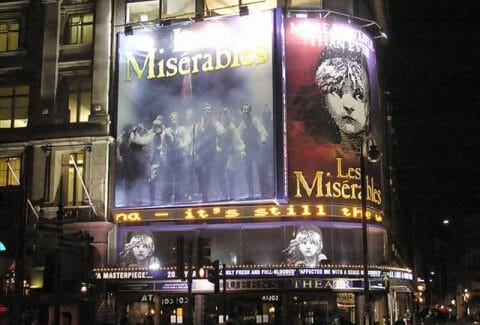 The Queen's Theatre is a London West End theatre on Shaftesbury Avenue, next to the Gielgud Theatre. The theatres were designed as twins by W. G. R. Sprague at the beginning of the 20th century. The theatre opened in 1907 and, as opposed to the Gielgud, whose exterior has little changed, the facade of the Queen's Theatre was hit by a German bomb in September 1940 so that the theatre today has a modern shell and an Edwardian interior. The Queen's Theatre has seen such talents as Edith Evans, George Bernard Shaw, John Gielgud, Noel Coward, Kenneth Branagh, Miranda Richardson, Nigel Hawthorne, Jane Lapotaire, Alec Guinness, Fiona Shaw and Maggie Smith.

The opening of the Queen's Theatre was not successful as had been hoped with Sugar Bowl, a comedy that ran for only 36 performances. This was followed by a succession of equally fleeting comedies and plays. It wasn't until 1914 that the theatre had its first big hit with Potash and Perlmutter by Montague Glass.

In the late 1920's two plays created something of a sensation at The Queen's Theatre. The first was Miles Malleson's staunchly anti-war piece The Fanatics. It caused a stir because it was one of the first to discuss sex and marital problems in such a way as was never before permitted. The second was an American murder trial called The Trial of Mary Dugan.

Since April 2004, the theatre has played host to Cameron Mackintosh's production of Les Miserables which transferred, after 18 years from the Palace Theatre just 100m up the road. The musical celebrated its 20th anniversary at the venue on 8th October 2005 and will overtake Cats as the longest running musical of all time on 8th October 2006 should it continue.

Les Miserables Tickets at The Sondheim Theatre Queens Theatre From £24.00
No Result
View All Result