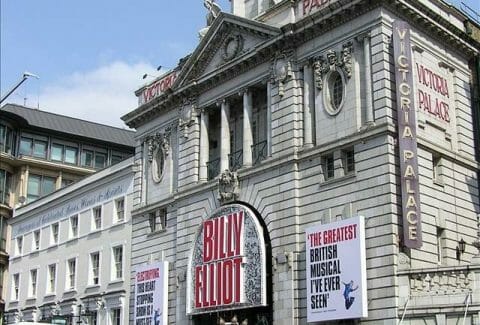 Buy tickets to Hamilton at The Victoria Palace Theatre!

The Victoria Palace Theatre is a West End theatre in Victoria Street, in the City of Westminster. Situated opposite Victoria Station, it was designed by Frank Matcham and opened in 1911 on the site of two music hall buildings from the second half of the 19th century which had both been demolished. Under impresario Alfred Butt, the theatre continued the musical tradition of the place by presenting mainly varieties and revues.

The domed auditorium seats 1,550 people. A sliding roof helps ventilate the auditorium during the intervals, which was a novelty feature in the days of heavy smoking during performances.

The theatre began life as a small concert room above the stables of the Royal Standard Hotel, a small hotel and tavern built in 1832 at what was then 522 Stockbridge Terrace, on the site of the present theatre – not, as sometimes stated, on land where the train station now stands. The proprietor, John Moy, enlarged the building, and by 1850 it became known as Moy's Music Hall. Alfred Brown took it over in 1863, refurbished it, and renamed it the Royal Standard Music Hall.

The hotel was demolished in 1886, by which time the main line terminus and its new Grosvenor Hotel, had transformed the area into a major transport hub. The railways were at this time building grand hotel structures at their termini. Added to this was the integration of the electric underground system and the building of Victoria Street. The owner of the music hall, Thomas Dickey, had it rebuilt along more ambitious lines in 1886 by Richard Wake, retaining the name Royal Standard Music Hall.

The Royal Standard, was demolished in 1910, and in its place was built, at a cost of £12,000, the current theatre, The Victoria Palace. It was designed by prolific theatre architect Frank Matcham, and opened November 6, 1911. The original design featured a sliding roof that helped cool the auditorium during intervals in the summer months.

Under impresario Alfred Butt, the Victoria Palace Theatre continued the musical theatre tradition by presenting mainly varieties, and under later managements, repertory and revues. Perhaps because of its music hall linkage, the plays were not always taken seriously.

In 1934, the theatre presented Young England, a patriotic play written by the Rev. Walter Reynolds, then 83. It received such amusingly bad reviews that it became a cult hit and played to full houses for 278 performances before transferring to two other West End theatres. Intended by its author as a serious work celebrating the triumph of good over evil and the virtues of the Boy Scout Movement, it was received as an uproarious comedy. Before long, audiences had learned the key lines and were joining in at all the choicest moments. The scoutmistress rarely said the line 'I must go and attend to my girls' water' without at least fifty voices in good-humoured support.

A return to revue brought new success. Me and My Girl was a hit in its original production at the theatre, opening in 1937 starring Lupino Lane. In 1939, songs from this show formed the first live broadcast of a performance by the BBC, and listeners could sing along to The Lambeth Walk. In early 1945, towards the end of the war in Europe, variety was presented under the stewardship of Lupino Lane. Headlining the bill from his radio series was Will Hay, with his schoolboy retinue of Charles Hawtrey and John Clark, and among the "turns" was Stainless Stephen, a comic acrobat comedian duo, and Victor Barna (then world champion table tennis player) giving an exhibition, who would invite audience members up on to the stage to see if they could beat him in ten points. From 1947 through 1962, Jack Hylton produced The Crazy Gang series of comedy revues, with a glittering company of variety performers including Flanagan and Allen, Nervo and Knox, and Naughton and Gold.

The long-running Black and White Minstrel Show played through the 1960s until 1972. In 1982, a production of The Little Foxes, saw Elizabeth Taylor making her London stage debut. Another unusually long-running show at the Victoria Palace Theater was Buddy – The Buddy Holly Story, that played for 13 years in London, beginning in 1989 (transferring to the Strand Theatre in 1995). After this, the theatre presented mostly revivals of well-known musicals.

In 2005, Billy Elliot the Musical opened, garnering rave reviews and Olivier awards. Billy Elliot still plays at the Victoria Palace Theatre selling out of tickets available on a regular basis.

The theatre has been owned by Sir Stephen Waley-Cohen since 1991. At the opening in 1911, a gilded statue of ballerina Anna Pavlova had been installed above the cupola of the theatre. This was taken down for its safety during World War II, and was lost. In 2006, a replica of the original statue was restored in its place.

1930: The Chelsea Follies, starring Jimmy Nervo and Teddy Knox
1934: Young England, a patriotic play by Walter Reynolds
1937: Me and My Girl, starring Lupino Lane
1947—1962: shows by The Crazy Gang
1962: The Black and White Minstrel Show
1978: Annie
1982: Windy City (based on The Front Page by Ben Hecht and Charles MacArthur)
1982: The Little Foxes, a drama by Lillian Hellman, starring Elizabeth Taylor in her London stage debut
1986: Charlie Girl, starring Cyd Charisse
1987: High Society (adapted from the 1956 movie, with music and lyrics by Cole Porter), starring Natasha Richardson and Stephen Rea
1989—1995: Buddy (based on the life of Buddy Holly)
2002: Kiss Me, Kate by Cole Porter
2003: Tonight's the Night (based on the songs of Rod Stewart)
2005: Billy Elliot The Musical (based on the original screenplay by Lee Hall, with music by Elton John) 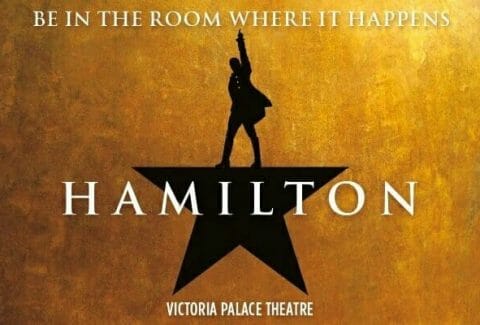