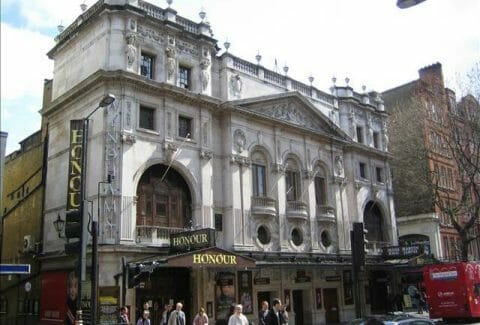 The Wyndham's Theatre is a London West End theatre located on Charing Cross Road, London. It is one of two theatres opened by the actor/manager Charles Wyndham, the other being the Criterion Theatre. The Wyndham's was designed by W.G.R. Sprague, the designer of six other London theatres between then and 1916. It is designed to seat 759 patrons on three levels.

The Wyndham's Theatre History and Performances

Wyndham had always dreamed of building a theatre of his own and through the admiration of a patron and the financial confidence of friends, he was able to realise his dream when Wyndham's Theatre opened on 16 November 1899, in the presence of the Prince Of Wales. The first play ever performed here was a revival of T.W. Robertson's David Garrick.

In 1910 Gerald du Maurier began an association with the theatre which was to last fifteen years and to include the stage debut of the screen goddess Tallulah Bankhead. Du Maurier's small daughter, Daphne, often watched her father's performance from the wings and, thirty years later, she would present her own play, The Years Between, on the same stage.

In January 1954 a small-scale musical pastiche, Sandy Wilson's The Boy Friend, which had begun life at the much smaller Players Theatre, was moved to the Wyndham's Theatre stage. It ran for 2078 performances, before eventually transferring to Broadway. During the sixties and early seventies the theatre continued to provide a setting for stars such as Alec Guinness, Vanessa Redgrave and Diana Rigg. The blockbuster of the decade – Godspell – came to the Wyndham's Theater in January of 1972 and lasted through October 1974. The original cast included David Essex, Marti Webb and Jeremy Irons.

More recent times at the Wyndham's have seen, amongst many distinguished productions, the world premiere of The Ride Down Mount Morgan by Arthur Miller and the British premiere of Edward Albee's Three Tall Women, starring Maggie Smith. Twenty-five years after making her debut here, Diana Rigg returned to play a hugely successful season as Medea. The critically acclaimed comedy, Art, by Yasmina Reza, began its record-breaking run at Wyndham's Theatre in 1996 with Albert Finney, Tom Courtenay and Ken Stott in the cast. It opened in October 1996, and transferred to the then Whitehall Theatre in October 2001.

Madonna made her West End debut here in 2002, performing in a sell-out production of Up For Grabs. This has been followed by many other dramatic productions including "Dinner" and the National Theatre's "Democracy" during 2004, Holly Hunter in "By The Bog Of Cats", American TV star Ruby Wax in a children's stage version of "The Witches" which ran during March of 2005, followed by a controversial limited season of Eve Ensler's "The Vagina Monologues" which ran without the stars – Sharon & Aimee Osborne who dropped out the night before the production opened. Since then, the theatre has seen Sienna Miller star alongside Helen McClory, Reece Sheersmith and Clive Rowe in a new production of Shakespreare's "As You Like It" and most recently Richard Griffiths in Tom Stoppard's new production of "Heroes".

In September 2005, the theatre was taken-over by Cameron Mackintosh's Delfont-Mackintosh Ltd.