Joz Norris is a Board Member of the Alternative Comedy Memorial Society and key member of the Weirdos Collective (Chortle Award winners). His previous shows have enjoyed sell out runs and been featured as fringe picks by the Guardian, Time Out and The Skinny.<

As an actor, he will soon be seen in BBC3’s Blindboy Undestroys The World and has appeared in Dave’s The Dave Talks, ITV2’s @elevenish, BBC Three’s Quickies and Channel 4’s Hodge Podge. His web series The Girl Whisperer has been nominated for numerous awards and he won Outstanding Supporting Actor at LA WebFest for his role in The Backbenchers.

Joz Norris is Dead Long Live Mr. Fruit Salad is coming to Heroes @ The Hive what can you tell us about it?

This is my sixth full solo comedy show, but my first since 2017. I took a year off last year to focus on acting, writing and filmmaking, partly down to some personal difficulties that were making it difficult for me to enjoy performing live comedy as much as I used to. I eased my way back into it by performing in disguise, and off the back of that created a sort of live-action cartoon character called Mr Fruit Salad who, ostensibly, was attempting to oust me from my own life. This show is an exploration of that, really – of who he is, of why he exists, of the feelings he helped me to make sense of. It’s mostly nonsense, but I’ve tried my best to make it nonsense that sincerely explores something I feel strongly about.

Last year I made a theatre show that explored loneliness and anxiety and sadness, and did it in a very heavy-handed way. I look back at that show as a failure. I wanted to make something that explored those same themes, but in a way that prioritised delight, and nonsense, and invention, and imagination, and let the audience draw their own conclusions about what was being said rather than moralising or sermonising. They’re themes very close to my heart, but I’d like to get better at making work that says something that makes the audience feel like they’ve said something.

How does this differ to other works you’ve written?

This is the first show I’ve made that I didn’t write by gigging – usually I cobble together several 7-to-8 minute routines or sections that have worked at gigs, and then try to string them into a coherent shape guided by whatever I’ve been thinking about that year. This time I started with the overarching premise and shape of the show, and tried to make the entire show an exploration of a particular feeling or mood. It still has little set-pieces and routines within it, but I built it from the outside-in this time rather than from the inside-out.

Well, not quite, but I have had to request that I be allowed to perform it in a specific venue, because there’s a very important part of the show that can only be performed there. I often build my shows around one image (me trapped inside a box, me stuck in the middle of a giant web), and this year the image that jumped into my head was a visual from a lot of cartoons I watched when I was a kid that I realised, because of the premise of the show, I could actually realise in live-action.

What’s the one thing about Joz Norris is Dead Long Live Mr. Fruit Salad that makes it different from all the rest?

On a superficial level, I’m pretty sure it’s the only show on the Fringe this year written and performed by somebody who is well aware that they don’t exist. In a way, it’s like any other character comedy show, except that Mr Fruit Salad is well aware he’s only here because I came up with him, and the show is his own efforts to understand what that means for him, and for me. On a deeper level, the show is an attempt to explore pain, and hurt, and anxiety, but without making it into a confessional show. I’d like it to turn hurt into silliness and confusion into fun, and I think it does that in a way that’s slightly different from the ways in which comedy shows have explored these ideas before. I’d like watching it to feel a bit like peeling an artichoke.

Why should people come see this show?

When I was writing it I was trying very hard to explore big ideas in interesting ways, and as a result I was worried that the finished show might be a bit too weird and self-referential for its own good. But I’ve been pleasantly surprised in previews and gigs to find that the character and the things he talks about and the games he plays and the ways he interacts with the audience seem to be things that even casual audiences find really delightful and silly. So honestly, people should come and see it first and foremost because it’s fun 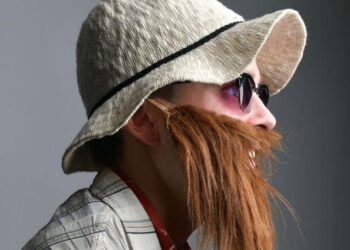