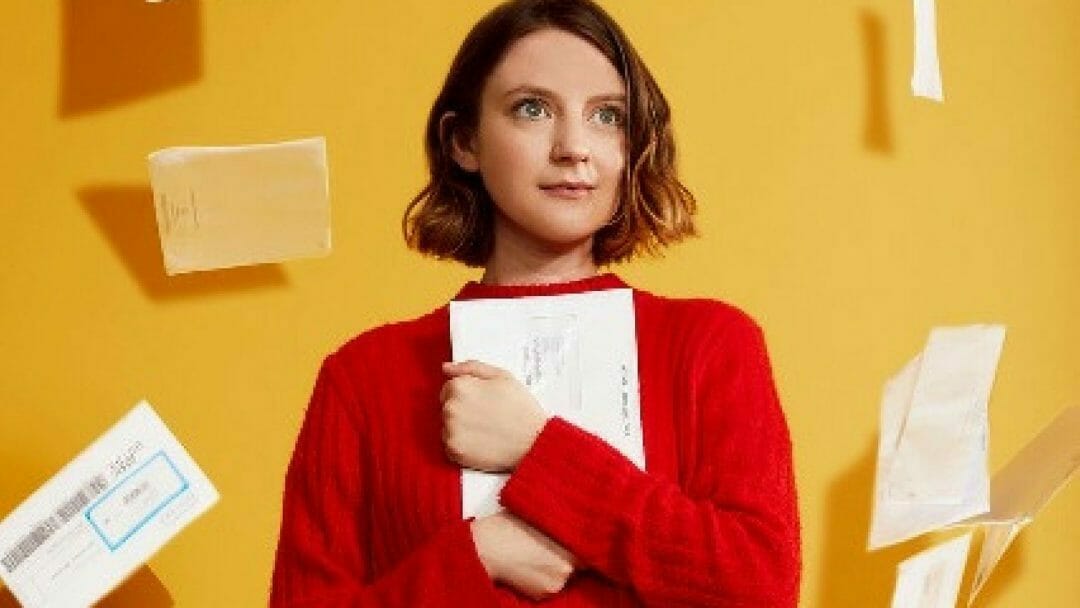 Hello! My name is Lydia Larson. I’ve been an actor for ten years and worked extensively in new writing including Travesty by Liam Williams, Brutal Cessation by Milly Thomas, and Skin a Cat By Isley Lynn.

Finding Fassbender is my debut play.  I like long dog walks with my boy Kenny Biscuit, a simple tomato sauce and pasta dish, anything dipped in houmous, Gary Lineker (dipped in houmous), The Idiot by Elif Batuman, houseplants and an impromptu dance.

Finding Fassbender is coming to Pleasance what can you tell us about it?

Finding Fassbender is a funny and heartfelt story about Eve, a thirty something woman who leaves her hometown of Wolverhampton for the first time to live and work in London. But Eve finds herself on a bigger journey, when she discovers a letter addressed to a film actor and decides to return it.  We follow Eve as she tries to find her place in the world and discover what she’s really made of.

I had the idea for the play about five years ago but it wasn’t until last year when I was offered a work in progress sharing at Vault Festival that it began to properly take shape. I am thrilled to be working with director Blythe Stewart again, after our time working together on Skin A Cat.

What’s the one thing about Finding Fassbender makes it different from all the rest?

Finding Fassbender has over twenty characters and I play every single one of them including a cameo from Michael Fassbender.  The show also contains a sweet soundtrack, the protagonist is from Wolverhampton (how rare is that?!) and it sits firmly between two worlds – fantasy and reality.

Finding Fassbender is loosely based on real events; in that five years ago, I was living in a flat in north London when I received a letter. I hadn’t worked for a while and auditions had totally dried up so the letter provided this little bit of inspiration. The idea came quite quickly after receiving it but I didn’t have the self-confidence or drive to develop it further for a long time!

How does it feel to be at Pleasance?

I’ve never performed at Pleasance before so I feel super cool and very excited. It’s such a buzzy venue and the programming is super exciting. We have felt incredibly supported and well looked after so far by everyone at Pleasance and I can’t wait to get started!

I would love everyone to see Finding Fassbender! At its core is a universal story about a woman trying to find the thing that connects her to the world, beyond being a wife and a mother. Eve worries she is not living a full enough life and we see her navigate the bigness and smallness of her world through a celebrity fixation.

This is the first time I’ve written anything before so the experience has been hugely exciting and liberating for me as well as completely terrifying. It’s also the first time I’m wearing the writer performer hat simultaneously which again is a thrilling roller coaster ride but also exposing. There is an element of safety and comfort in hiding behind someone else’s words on stage and telling their story. I’ve been so lucky though to have the support of some amazing women who have made this whole process a lot less daunting.