Steve Hartill is part of Degrees of Error and their show “Murder, She Didn’t Write” makes the trip to Edinburgh on an annual basis to do their improvised murder mystery show for the whole month. As a company, they’ve been around since 2013, and are made up of professional and semi-professional performers.  Focusing on improvised dramatic and comedic work, they are the resident theatre company of The Bristol Improv Theatre, where they rehearse and perform regularly.

Murder, She Didn’t Write is coming to The Pleasance what can you tell us about it?

That it’s one of the most fun shows at the Fringe! We’ve been doing Murder, She Didn’t Write (MSDW is our snazzy acronym for it) for years now and every show is still super exciting. That’s because it’s all improvised on the spot – one lucky audience member gets chosen at random by our detective to play Jerkins, the crucial sidekick who will help our detective solve the murder mystery of the show. That mystery is written by the audience, who suggest a setting and clues to inspire the cast. Then Jerkins gets the god-like power to choose who dies and who did it from our cast of colour-coded characters, and our brilliant detective ties it all together in a masterful denouement. Every show is different, because every Jerkins and every audience is different, so we’re always looking forward to finding out what we’ll get given that day!

What’s the one thing about Murder, She Didn’t Write that makes it different from all the rest?

The fact that it’s improvised puts the show into a smaller subset of all Fringe shows, but we’re in good company alongside other big improv names. What makes us different to them are a few things… We come with lots of production value (chaises longues galore!) and very colourful, crafted costumes that make our show look very different to a lot of improv out there. At the same time, it’s a real tried and tested show. Even though every individual show is different, new, and never to be seen again, we’ve cracked the formula to creating a real murder mystery over several years of work. Finally, we’re all very close! It might sound soppy, but a lot of improvisation depends on knowing your cast-mates really well, so you can almost predict what they’ll do or say next. We’re all such good pals that we’re almost a hivemind some days.

How does it feel to be at The Pleasance?

Last year was our first at The Pleasance, and we were incredibly excited to be making the move. Obviously it’s great to be alongside so many amazing acts and being on The Courtyard at its busiest feels like we’re at the very heart of the Fringe. We were also really lucky to meet some awesome people last year who help with our tech, our set, and just getting to know us made us feel really welcome. Honestly, we are so excited to be back!

How did you get involved in Murder, She Didn’t Write?

I got involved in the show about four years ago, when I was graduating from the University of Bristol and wasn’t sure what I wanted to do next. I was already good friends with a lot of the cast at the time, including Lizzy & Steve our directorial team, so of course I said yes when I was asked to join! I’d already done plenty of improvisation at university, and when I joined MSDW had already existed for a year or so.

What’s the best/worst thing about directing a show at Edinburgh Fringe?

I’m technically answering on behalf of Lizzy & Steve our directors, so I’ll say the best thing is obviously how great and helpful we all are as a cast! But the other best thing about directing this show is that the focus is always on keeping it fun for everyone involved. Because it’s improvised, the audience and the cast are in it together, in a sense, so when they’re enjoying themselves we are as well, which really makes a great directing experience. The worst thing is probably that the power goes to my head way too quickly.

Depends on the show! Because it’s improvised, my character changes depending on the suggestions we get. I recently played a Johnny Cash-like character for a whole show where the suggestion was “a music festival”, for example. I do have a couple of things I particularly enjoy playing though. Bumbling aristocrats are always fun, as are very happy-go-lucky Americans. The characters I improvise tend to be quite big and bold types, who say a lot and run around almost as much. But who knows what characters we’ll get this year?!

Who will Murder, She Didn’t Write appeal to the most?

Fans of murder mysteries! If you like Sherlock, Miss Marple, Poirot or any other case-cracking detective interrogating a suspicious array of characters, you’ll love MSDW. At the same time if you’re a fan of improvisation in general, we’ve combined off-the-cuff comedy with a show as close to the truth of the genre as we can. So if you’re looking for a show that combines the genuinely thrilling twists of a whodunnit with the bold, mad-cap comedy of improvisation, this is the perfect mixture for you.

Murder, She Didn’t Write is at Pleasance Courtyard – Pleasance Beyond from August 1st – 27th. 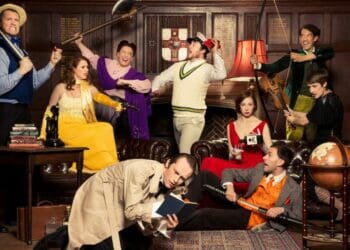 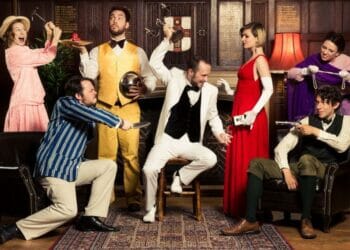