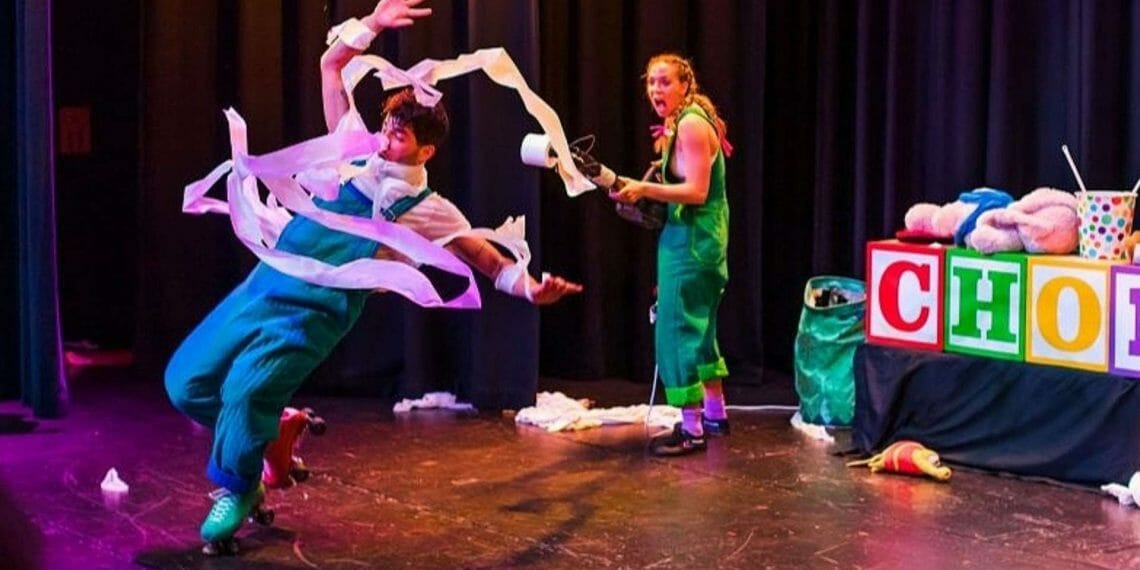 Chores is playing in the Piccolo Tent at the Assembly George Square Gardens and the premise for this children’s show is appropriately simple; two young siblings must clean their room and if they do a good job they will be allowed to ride their bikes. Something we can all connect with.

The action is delivered by two acrobat clowns who, as their website states, are “inspired by Buster Keaton and Charlie Chaplin”. Fifty minutes of non-verbal tomfoolery unfolds as our protagonists move from comic moment to moment, striving to both clean the room and have some fun along the way.

The premise is strong, however the promise is never fully met. An initial frustration is that there are two highly skilled performers leading the show but they play very similar characters. Both slightly furtive, both cheeky, petulant and seeking out opportunities to make mischief. This lack of contrast as characters means that there is an opportunity lost in offering a dynamic for them to play with. As a result, it becomes a two-dimensional piece, which just about holds the young audience for the duration.

The set is simple, allowing for plenty of space for what we had hoped would have been acrobatics, circus skills, tricks and moments of physical delight. However, there are a number of transitions and set pieces which are either repeated, involve a little too much soft toy abuse or simply stretch out too long.

The first truly spontaneous audience applause came at the 40-minute mark. This was for a display of physical prowess which I think we could have benefitted from much earlier in the piece. I appreciate that I was allowed to watch a preview performance of this production and therefore it is harsh to judge them too strongly on that. Given more shows under their belt, I am confident they will tighten up many of these moments as they read, reflect and respond to their first audiences.

Chores is simple, silly, and sweet for a younger audience.