The absolute highlight of any visit to The Edinburgh Fringe has to be the annual production from Young Pleasance, a producing arm of The Pleasance which acts as a launchpad for new talent and ideas.  This year’s production; The Curse of Cranholme Abbey, under the direction of Tim Norton and Kathryn Norton-Smith, has all the trademarks that Young Pleasance has become famous for.

A young man has inherited Cranholme Abbey from his father, an old building with a colourful past.  With a group of friends, he visits the abbey for the first time, of course there is no phone signal and they used the last of the petrol to get there, so they are now completely cut off!

Cue a good old-fashioned horror story; as the ghosts of the past have their stories told alongside the modern-day adventure.  Eventually the timelines intertwine and the terrible secrets that the abbey holds, puts our intrepid young group of friends in real danger.

As usual, it is a large-scale production, with 30 actors portraying 100 roles.  It is wonderful to see the scale of the production and shows off just what can be achieved in Fringe theatre, but it does make it difficult to pick out any particularly strong performances, which has been possible in the past.

The staging is also amongst the best you’ll see at the Fringe, with elaborate sets and a few illusions thrown in.  Young Pleasance creates visually stunning theatre which some London fringe venues would kill for, never mind Edinburgh.

The Curse of Cranholme Abbey doesn’t disappoint from a production point of view. It’s fantastic to see these young actors get such an incredible opportunity, but perhaps an hour doesn’t do such a large cast justice, and more time should be given to ensure these talented actors don’t become ghosts in audiences memories. 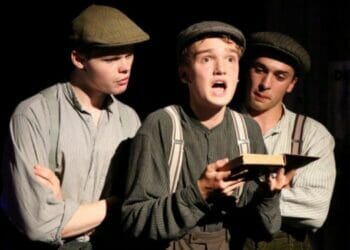