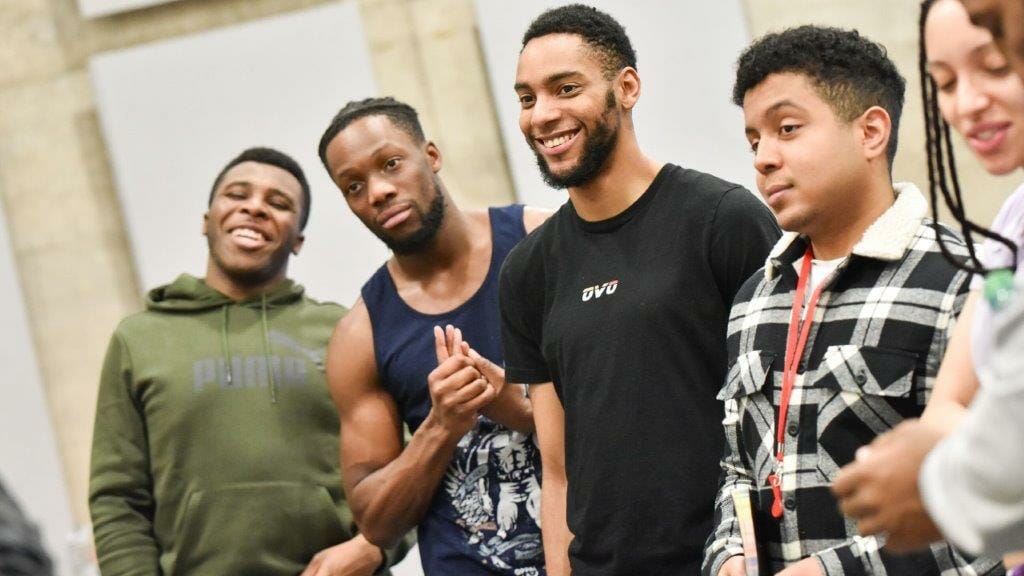 Crongton Knights, which after premiering at the Belgrade Theatre Coventry from the 8-22 Feb will head out on a national tour, is co-directed by Corey Campbell and Esther Richardson and features in its cast Kate Donnachie ; Simi Egbejumi-David;  Zack Douglas; Nigar Yeva; Olisa Odele; Aimee Powell; Khai Shaw and Marcel White.

Life isn’t easy on the Crongton Estate and for McKay and his mates it’s all about keeping their heads down but when a friend finds herself in trouble, they set out on a mission that goes further than any of them imagined.

Crongton Knights will take you on a night of madcap adventure as McKay and his friends ‘The Magnificent Six’ encounter the dangers and triumphs of a mission gone awry. In this world premiere adaptation of Alex Wheatle’s award-winning novel, the pulse of the city is alive on stage with a soundscape of beatboxing and vocals laid down by the cast and created by acclaimed musician Conrad Murray.

The production will be the second of four co-productions between Pilot Theatre, Derby Theatre, Belgrade Theatre Coventry and York Theatre Royal who last year formed – with the Mercury Theatre Colchester – a new partnership to develop theatre for younger audiences. From 2019-2022 the consortium will commission and co-produce an original mid-scale production each year. Each production will play in all the consortium venues as well as touring nationally.  The consortium’s first production, Noughts & Crosses, was seen by over 30,000 people on tour with 40 % of the audience being aged under 20.

For more information and tickets on please visit https://www.pilot-theatre.com

First Look: Noughts and Crosses at Derby Theatre in Rehearsal