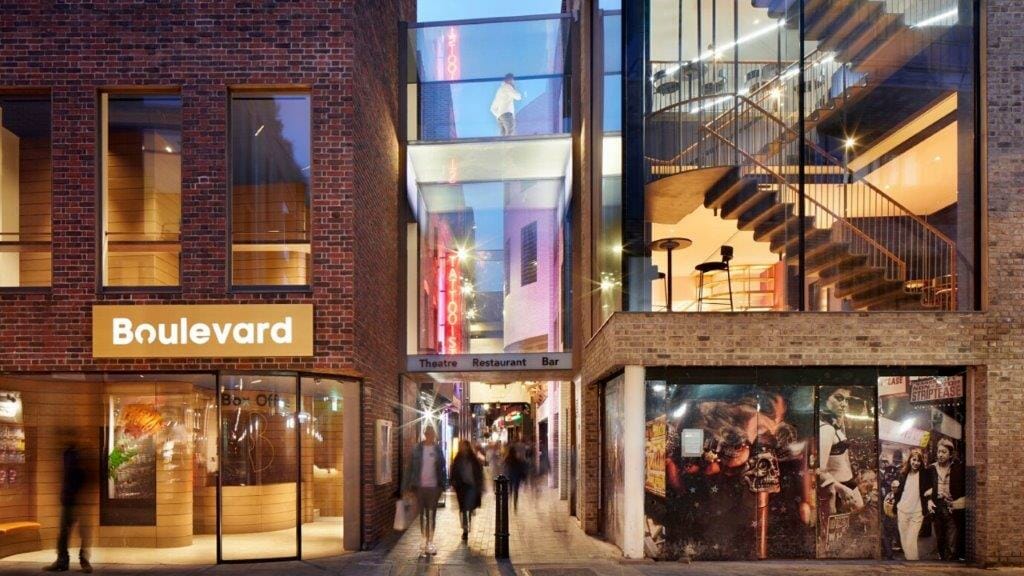 Stunning new images of the Boulevard theatre have today been released days after the theatre opened its doors to the public for the first time for the London premiere of Dave Malloy’s Ghost Quartet, directed by Bill Buckhurst.

The restaurant is also now open from 8am daily. Alongside this is a vibrant late night and Sunday programme including a wide range of jazz, comedy, poetry, and more.

The Boulevard Theatre is located in the heart of Soho in Walker’s Court. Architects SODA studio, in collaboration with theatre specialists Charcoalblue, have designed an innovative new flexible space which features Europe’s most advanced revolving theatre and a two-floor glass bridge leading to a restaurant and bar area. For more information on the building, download the press pack here.

SUNDAY SERVICE: CONCERTS will see an eclectic music programme, curated by Katy Hamilton and Benjamin Cox, including iyatraQuartet, the Hermes Experiment and The London Klezmer Quartet.   Artists confirmed so far for SUNDAY SERVICE: POETRY include Inua Ellams, Helen Mort and Richard Scott. SUNDAY SERVICE: PODCASTS takes the freshest voices out of your headphones and into our auditorium, and will feature popular titles such as Standard Issue, Freelance Pod and The Showstopper! Podcast.

Nicole Scherzinger to Perform at the Boulevard Theatre