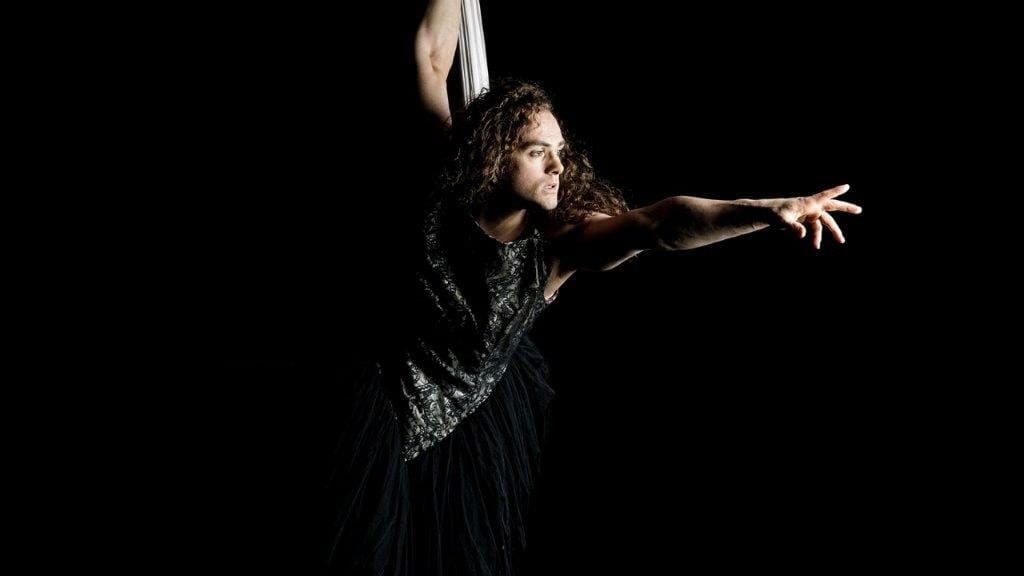 Adam Wright stars in Cirque: Viola adapted and directed by Charlotte McKechnie. Following a sold-out première at the Scottish Mental Health Arts & Film Festival New Voices Theatre the production will be showing at Jacksons Lane for one night only on Saturday 15 February.

Viola is a reimagining of Twelfth Night, weaving Shakespeare’s original text with aerial performance, floor acrobatics and a live improvised soundtrack to illuminate the inner questions and turmoil of Shakespeare’s most vibrant heroine. Viola is performed as a solo show, told purely from her point of view.

You’re starring in Viola at Jackson’s Lane: what can you tell us about it?

Viola, our titular character, is originally from Shakespeare’s “Twelfth Night”, a comedy about changing identities and turning conventions on their head. We explore the play purely from Viola’s perspective, following the journey from washing ashore in a shipwreck to entering the court of Count Orsino disguised as Cesario, a man, and the freedom found in that identity.

We take a darker look at Viola’s experience – the grief, the ostracization, the self-questioning – taking inspiration from the original comedy, but using the text as a starting point to explore the questions Charlotte (Creator/Director) saw underneath this character. At the beginning of the play and the show, finding themselves alone on the shore, with a brother presumed dead, Viola is lost, scared and their only option for safety is to hide as a man. But Viola’s identity starts to shift and break down as they grow into their role as Cesario. At this point who is Viola and who is Cesario? Can the two coexist? Can they be the same person? Would they be accepted as such? We deliberately refer to Viola/Cesario using “they” as so much of the show, inspired by Viola’s original Act Two monologue, is an effort to explore who the character is now and who they might be – and that’s on neither side of the gender binary.

We approach these questions, of identity, of fear of rejection, primarily through movement: dance, acrobatics and aerial became perfect mediums to explore what can’t be expressed verbally. The text, distilled from the play, is woven into the soundscape, which creates an entirely immersive experience, and we have a violinist and cellist who live-improvise a musical landscape off of my choreography.

It’s a raw exploration of the self at our most desperate moments, but it’s also (hopefully) a hauntingly beautiful and entertaining piece of theatre to watch.

How did you become involved in the production?

‘Viola’ was originally conceived by my friend and director Charlotte McKechnie. She had the idea of combining circus and theatre to tell the story she saw under the traditional narrative. Her pitch to me was “Queer Shakespeare” and that was all it took for me to want to be involved.

I became involved early on in the process. Many coffees were purchased as we tried to figure out how we could turn a famous Shakespearean comedy into a single character exploration while keeping the story and character journey intact. Once we crafted that storyline and Charlotte decided the thematic beats and questions she wanted to answer in each scene, I began devising a choreographic language to create the evolution of Viola and Cesario.

We premiered the work at the Scottish Mental Health Arts & Film Festival in May 2019 and then revised the production, incorporating the spoken text in the sound design and further enhancing the choreography, for this tour.

What were your first thoughts when you heard acrobatics were being combined with theatre?

I thought it offered an exciting, if brutal – physical and mental – challenge. Finding ways to embody the character without speech was liberating. It allowed me to express myself more fully and without being filtered. I created a vocabulary of ballet and contemporary dance and pictured a spectrum on which Viola stood at one end and Cesario at the other. Each persona felt different to perform but ultimately intrinsically linked to the other: Cesario tends to be more grounded and angular, Viola tends to be more extended and expansive but those definitions become less clear as the border between the two blurs.

Tell us how music plays an important role in Viola?

The music is crucial: beyond establishing our scenes’ settings, our soundscape is another emotive language through which to understand Viola/Cesario’s story. Zakarya Hassan (violin) and Rufus Huggan (cello) created a harmonic structure for each scene but live improvise each night, based off of my movement. It’s a phenomenal feat that entirely opens up the world of Viola for both me and the audience.  As they play I feel the music working through me: making me scared, bolstering me through hard moments or allowing me to soften and show weakness. We react to each other, so each performance is slightly different as we explore different energies.

What do you think this fusion of Shakespeare and circus gives audiences that they wouldn’t normally get?

It certainly breaks with naturalistic or melodramatic acting common to Shakespeare. Without the softening of speech and articulated thought the emotion in the show is raw and even primal at times. You can see how the body reacts in panic without being subdued by governing thought. In that vein, we get to explore a narrower story much more fully than a production of Twelfth Night. We get to know Viola and Cesario more intimately and truly see them as they are, even behind the mask they wear.

What would you say to anyone thinking of coming to see Viola?

Viola starring Adam Wright will be showing at Jacksons Lane for one night only on Saturday 15 February.