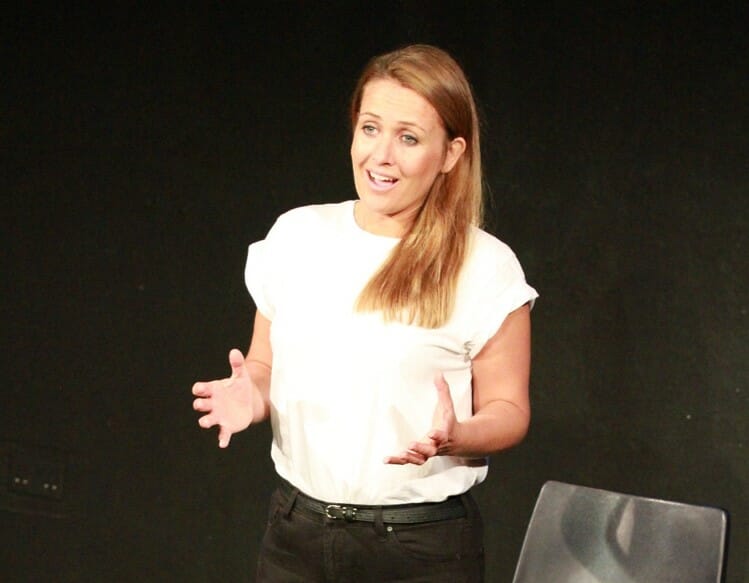 Emma Packer’s CTRL+ALT+DELETE will run at the Tristan Bates Theatre this April as part of their FIRST Festival of Solo Performance 2017, we caught up with Emma to find out more about the show.

Details of the FIRST Festival of Solo Performance can be found here.

You’re performing CTRL+ALT+DELETE at the FIRST Festival of Solo Performance, tell us a little about the show?

CTRL+ALT+DELETE is a tale of resilience in the face of adversity and tells the story of Brixton girl, Amy Jones, who seeks to challenge the injustices of the world, and challenge why sometimes the very ones who brought you in to the world are the cruellest to you.

How did the idea first come about?

I wanted to explore and draws parallels between control and abuse of power within a domestic setting and in wider society.

CTRL+ALT+DELETE examines the myth that all mothers are loving and protective of their children which serves to isolate us from the truth and the harsh realities of life. The show addresses the subject of female violence, and seeks to raise awareness of this subject. Whether it is female on female or female on male violence, this kind of violence is difficult to address, although we know it is always happening. People are constantly suffering mental and/or physical abuse in silence, and I hope that CTRL+ALT+DELETE can raise awareness around this very important subject matter.

How much of the character, Amy, comes from your own experiences?

My writing is always based on experiences I have observed. However, Amy and I are both very passionate about politics so we certainly have that in common.

How much has it changed since it was first performed last year?

The Camden Fringe was a great platform for the re-write. It made me aware of what worked and what didn’t and I’m hoping any changes we have made will improve the show further.

What do you like/dislike about performing solo?

I love being able to perform all the characters within the show. It’s a challenge but who doesn’t love a challenge?

CTRL+ALT+DELETE is directed by Katherine Hayes, and you’ve worked together before at the Edinburgh Fringe, what did you learn from that experience?

Katherine Hayes is a fantastic director and I have her to thank for the success of the show both in Edinburgh in 2014 and last year at the Camden Fringe. The Edinburgh festival is such a great platform for new material. You learn very quickly what needs to go and what requires further exploration. I was also very inspired by other writers when I was up there and hopefully this steep learning curve has resulted in a piece that has matured and developed in the right way. We didn’t really get to ‘meet’ the character of the mother in the Edinburgh show, but I have since developed her so we can see who she is as person and understand her as a complex character. Amy has grown as well, she has matured with the piece but hopefully not lost her playfulness and lust for life. The political side of the piece has become more relevant to today; addressing issues such as the Housing crisis, Immigration and Brexit.