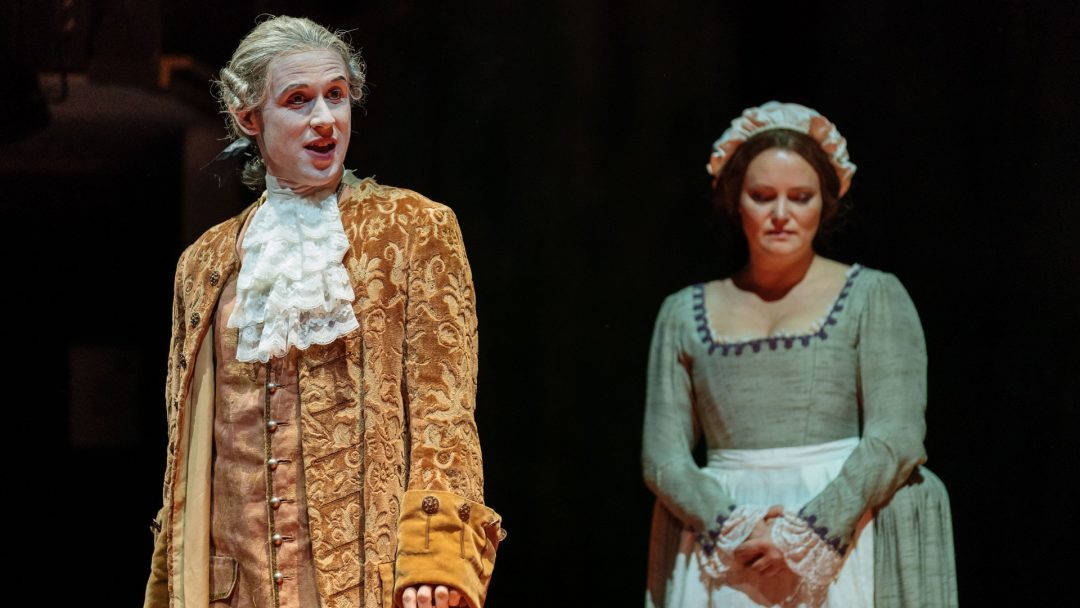 Ian Hallard stars in Hogarth’s Progress, a double-bill of comedies by BAFTA Award winner Nick Dear, following one of Britain’s most celebrated artists on two monumental pub crawls. The plays explore the extraordinary lives of William and Jane Hogarth at a time when culture escaped from the grasp of the powerful into the hands of the many.

The plays will run in rep as part of Rose Theatre Kingston’s 10th anniversary season until Sunday 21 October. Each play can be seen as a single performance or enjoyed together, either over different days or as a thrilling all-day theatrical experience.

Hogarth’s Progress is playing at the Rose Theatre Kingston, what can you tell us about it?

It’s a double bill of plays about the artist William Hogarth. The first one ‘The Art of Success’ was written thirty years ago, and Nick Dear has written a brand new play ‘The Taste of the Town’, which is set thirty years later. It’s a rare opportunity for an audience to discover how both the character and the playwright have matured. And you get two energetic romps through the 18th Century into the bargain.

You need to learn and rehearse for two different roles, how challenging is that?

My two characters are both upper class and they’re both antagonists: each of them do their best to disparage and provoke Hogarth, although they do so in very different ways. Oliver the Viscount is fat, coarse and ruddy-faced, whereas Horace Walpole is effete, refined and sly, so hopefully there’s a pleasing contrast between them, in spite of their surface similarities.

Rehearsing more than one play at once is always a challenge, as there’s a certain amount of plate-spinning to be undertaken in order to keep them both simmering and ready to put before any audience, but our director Anthony Banks has done so very skilfully.

What’s your favourite thing about each of your characters?

Oliver is a monster: a debauched, sexually insatiable glutton, so it’s wonderful getting to play such a broad and unpleasant grotesque. And (Spoiler Warning) I also get to run around the stage in a blood-soaked shirt and stockings, before snogging Ruby Bentall and stripping Bryan Dick naked. It’s certainly a curious way to earn a living.

Horace Walpole, meanwhile, is one of those glorious roles that only come along once in a blue moon. From the moment I read the script, I knew I’d love to play him. He’s camp, witty and very bitchy. And while Oliver is fictional, Horace is a historical figure, so it’s been fun to research him, and to be able to visit his home at Strawberry Hill, which is where the scene takes place, was fascinating.

The Taste of The Town which is second in the double bill, is having its world premiere, how are audiences reacting to it?

The audience feedback has been fantastic. It’s a comedy first and foremost, with a host of wonderfully colourful characters, including the disarmingly vain actor, David Garrick, a couple of frightfully outspoken Blue Stockings, and Lady Thornhill – the mother-in-law from Hell (quite literally as it turns out). Having said that, the final scene of Hogarth in his dotage, hosting an outing for local orphans at his home, is very touching. Keith Allen (who plays the elder Hogarth) is such a great clown, it’s a pleasure to spar with him in our scene together.

And the audiences are lapping it all up. A few lucky ones are even offered the opportunity to enter our ‘tea shop’ and experience one of the scenes from the stage.

What do you enjoy most about Nick Dear’s writing?

It’s deliciously filthy and ribald one minute, and then incredibly poetic and beautiful the next. I sit in our dressing room, listening to the show, and after all these weeks, I still find myself laughing out loud at some of the lines. Nick has a proper talent for creating larger than life, incredibly entertaining characters while still keeping them grounded in reality. And he’s written some beautifully waspish material for me to deliver as Horace Walpole, so I’m immensely grateful for that!

What would you say to anyone thinking of coming to see Hogarth’s Progress?

And you don’t have long! We’re only playing till Sunday 21st October.