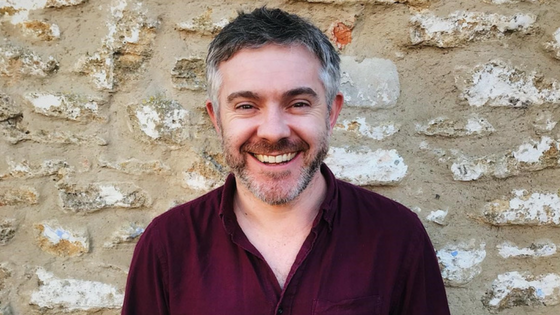 Award-winning theatre company New Old Friends present Crimes Under the Sun, a comedy thriller, directed by James Farrell.  We spoke to James to find out more.

You’re directing Crimes Under The Sun, what can you tell us about it?

Crimes Under The Sun is comedy murder-mystery set on the English Riviera in the 1930s. It’s sparkly, silly, and scary in equal measure and will (hopefully) have the audience howling with laughter and gasping in shock.

How do you make sure you strike the right balance between murder-mystery and comedy?

I’m a big believer in playing comedy ‘straight’. If an actor tries to get a laugh for the sake of it, the audience may well laugh, but there won’t be a heart to the performance. So we’ve rehearsed the play as if it’s a classic Agatha Christie whodunit you might see up and down the country with red herrings, incompetent police officers, and more plot twists than an episode of Vera. However, the situations the characters find themselves in, the actors’ portrayal of the characters, and the fact there are only four actors playing all the roles gives us enough opportunity to make the audience laugh whilst telling a really great story. Plus, we’ve thrown in a few silly curve balls to keep the audience giggling on the edge of their seats.

Do you need to think about the different venues on the tour when directing?

Absolutely. Part of the joy of touring theatre is the challenge of making a show that fits into each new venue. But it’s a big challenge so it’s always in my mind whilst we’re rehearsing. Our wonderful stage manager had a really clear idea of the venues we were going to so it was possible to think in advance how me might change the staging where necessary. For instance, at Salisbury there is a thrust stage so we had to think about how the final scene would be played without revealing any of our ‘secrets’ too soon. We also have three different lighting designs so every venue (no matter how big or small the lighting rig is) will get a beautifully lit production.

How involved are you once the tour starts?

Very much so. I’ll receive a show report after each performance so I can see if there are any recurring issues that might need addressing. I’ll also watch the show once a month and give the actors notes – just to make sure they’re not deviating ‘too much’ from what we rehearsed. This is not to say the production can’t grow and develop on tour, because it’s really important for the actors’ enjoyment and sanity that it does, but that the heart of the story is still being told with clarity and precision.

How have the cast reacted to the script?

Really well. From the first read through there were giggles and gasps in equal measure and they’ve continued throughout rehearsals. We’ve also been really fortunate in having the writer in the room so it’s been possible to make any edits to make sure the story is told in the best possible way.

What would you say to anyone thinking of coming to see Crimes Under The Sun?

Crimes Under The Sun has something for everyone. There is a great murder mystery to solve, a bellyful of laughs to be had, and a wonderful love story weaved throughout it all. And I genuinely believe it appeals to audiences of all ages so the whole family can come along and have a great night out.

Crimes Under The Sun is touring until May 2018, tour details here.