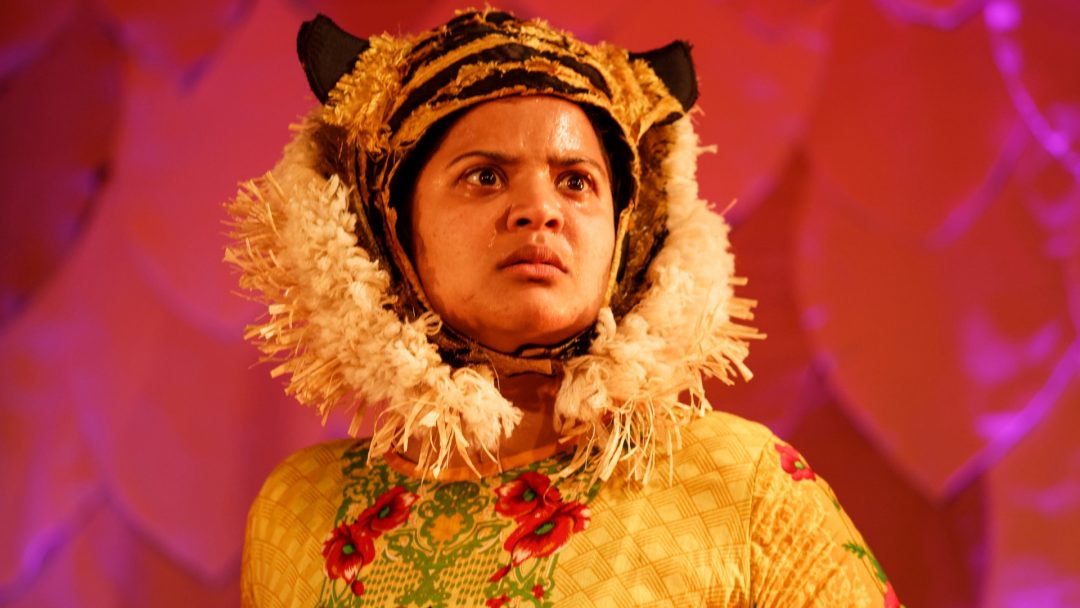 Polka Theatre is co-producing with Tara Arts the first-ever stage adaptation of The Panchatantra in the UK.  Medhavi Patel stars in Shamser Sinha’s Three Sat Under The Banyan Tree based on India’s Aesop’s Fables, and joined us to tell us more.

Three Sat Under The Banyan Tree is at Polka Theatre 28th September to 21st October 2018.

Three Sat Under The Banyan Tree is coming to Polka Theatre, what can you tell us about it?

It’s a story of three refugee children fleeing their land with a magical book they promised their father they would read. But first they have to find a Banyan tree and then stay together in the process of reading the stories which take them to another magical world.

How would you describe The Panchatantra to anyone who’s never read them?

The Panchatantra are an ancient Indian collection of short stories and fables originally written in Sanskrit. Often the main characters are narrated through animals and birds, these stories are renowned to provide both clever and valuable life lessons for both adults and children in an enlightening and multilayered way.

Tell us about your character/story?

One of the characters I’ll be playing is Tawny the Tiger. He is the lieutenant to the Lion King and is a brave tiger who kills on the king’s orders. His best friend is Veer the Jackal. Tawny has been asked by the king to investigate and kill once again but Tawny is torn between his duty and love for the forest.

What do you like most about Yasmin and her story?

Yasmin is torn between feeling angry about her current circumstance and not knowing what to do next. She loves her brother and sister but has a dark past which makes it hard for her to trust people easily, especially adults. Her cynicism is a clear mask for the way she deals with her fears. However, she is a tough cookie and her hard life has given her a strong spirit and so she isn’t easily broken. She knows how to stand her ground and calls out on things the way she sees them unapologetically.

What do you think makes these fables particularly suitable for the stage?

This show will be an amazing way of showing children that anything can have value if you can use your imagination and be inventive, whether it’s an inanimate object or a vocal rhythm or even a rhythm or beat with your feet and/or hands. This coupled with the story’s life lessons will hopefully inspire both children and parents to keep exploring together.

What would you say to anyone thinking of coming to see Three Sat Under the Banyan Tree?

Be prepared to be taken from one reality to another in a matter of moments by Jayaben, Mahendra and Yasmin as they embark on an emotional, magical and learning journey in a forest, under a Banyan Tree with their mystical book.

Tara Arts Announces Sunita Pandya as Chair of Board

Founder of Tara Arts, Jatinder Verma MBE, is to Step Down as Artistic Director