Taz Skylar as Leonard Vole in Witness for the Prosecution. Credit Ellie Kurttz

Taz Skylar joins the cast of Witness for the Prosecution as the production celebrates its 2nd birthday at London’s County Hall.  Playing the role of Leonard Vole who is accused of murdering a widow to inherit her wealth. The stakes are high.  Will he be able to convince the jury of his innocence and escape the hangman’s noose?

As the production enters its 3rd year in the iconic London venue, over 260,000 people have borne witness to this gripping courtroom drama and the case of Leonard Vole, accused of murder in cold blood. The twists and turns of the case are played out as prosecution battles defence and witnesses take the stand to give their shocking testimonies.

You’re starring in Witness for The Prosecution at County Hall, what can you tell us about it?

The way a lot of people perceive my character (Leonard Vole) to be the leading character in this story, is a really interesting test of perception. It reminds me of the way people (including myself) consider the son in Florian Zeller’s play, “The Son” to be the lead character, when in fact it’s his father… And in our case, it’s Sir Wilfrid, Leonard Vole’s barrister.

It’s through Sir Wilfrid’s eyes that we witness the full story happen and it’s through his judgement and idiosyncrasies that we get sucked in. He spends the most time on stage out of all of the cast… And if I’m honest, HE’S probably my favourite character.

The actor who plays him, Jo-Stone Fewings, is like a father to me and never ceases to amaze me with his talent, energy, perseverance and all-around good vibes (:

You’ve just taken over the role of Leonard Vole, what’s the best thing about playing this character?

There are very few complex, dexterous characters on stage for lads my age. Leonard is one of them. And everybody who’s had the chance to play him and will play him in the future should count their blessings and be thankful.

How does Leonard Vole compare to previous roles you’ve played?

I mean, I guess he’s similar to me in the sense that he makes friends easily and he can convince people to do crazy things… But he’s nothing like me in his physicality, his use of language, temperament etc.

Leonard walks around with a straight back, calling people “sir” and wearing a suit.

I walk around speaking like a… well, I don’t know what it is I speak like… I say “Yo” a lot and most of my gear is motorcycle gear…

What have you found most challenging about joining this production?

I guess the most challenging thing, which is always really a challenge, is wanting to do the best job possible for the people taking a chance on you.

Lucy Bailey, the director, is an absolute ANGEL of a person. When somebody as lovely and as experienced and talented as Lucy is directing you, the challenge is to make sure you make all of Lucy’s dreams come true for the character, because you’d never want to let her down. I wanted to be to her what she was to me. Everything I could have ever wanted (not sure I achieved that haha! But I did my very best).

And same goes for everybody else in the company… Eleanor Lloyd and Rebecca Stafford, the producers are two people whose work I’ve admired for a very long time. I think producers are very often overlooked in this industry, but it’s thanks to them that everything happens in the first place. They have been a dream set of employers, along with the general manager, Tom Powis… The challenge is to do them justice every night, make them proud and look after the part which they have entrusted me with for this period of time.

Same goes for everyone else in the company. Ellie Collyer-Bristow, the lovely and supportive Casting Director. The SMs, Front of House, wigs, make-up, etc… I could go on and on about how wonderful each person in the company is and how that challenges you to do better every night.

Why do you think Agatha Christie’s work remains so popular today?

Charles Bukowski once said: “To do a dangerous thing with style, is what I call art”.

And that’s what Christie does. She’s created countless works of art which to this day still constitute the base plate for all modern Murder mystery tails. Not naming any names but… Anyone see any resemblance to Christie in “Knives out”? (wink wink)

What’s been the biggest surprise to you in performing in a non-traditional theatre setting?

You’re much more aware of the audience. It’s so easy to catch their eyes by accident. A mentor once told me “At The Globe you have three options: Look to the skies of Heaven, look to the depths of Hell, or look into the whites of somebodies eyes”… That’s what this feels like.

What would you say to anyone thinking of coming to see Witness for The Prosecution?

Witness for the Prosecution, now in its third year, is on at London County Hall, currently booking until 13 September 2020.  Tickets are on sale here. 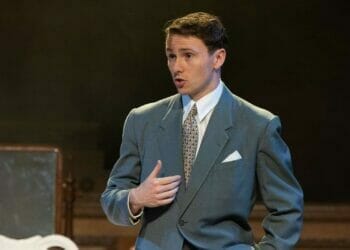 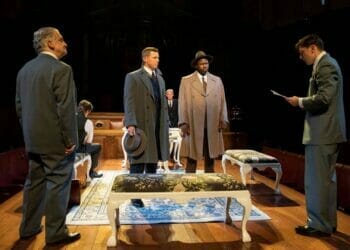 First Look: The Reopening Cast of Agatha Christie’s Witness for The Prosecution

Interview: Joe McNamara on Playing Leonard Vole in Witness for the Prosecution 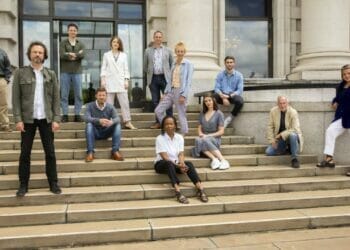