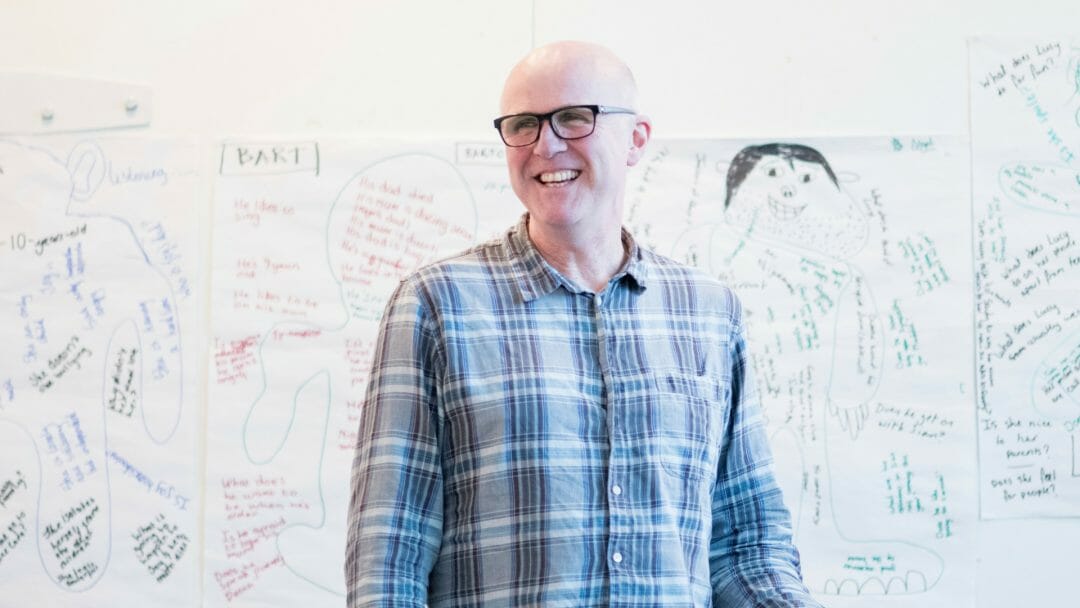 The poet Cinna hardly speaks a word in Julius Caesar before he’s mistaken for someone else and torn to pieces by the mob. Now he gets the chance to speak for himself. As Cinna searches for the subject of his next poem, the audience are invited to write with him, live.

You’re bringing I Cinna (The Poet) to The Unicorn Theatre, what can you tell us about it?

It’s the story of a poet with writer’s block who watches the world fall apart outside his door. Cinna is a pathetic but rather endearing procrastinator who spends too much time on his phone before finally stepping outside and suffering the consequences.

I think I, Cinna (the poet) is the most fully developed hybrid of my young people’s work and my more grown-up stuff. Cinna is an artist living in a time of political upheaval. He invites the audience to work with him to understand his situation. He hands the play over to the audience.  During the performance, the audience writes with Cinna. We write together –  guided at first and then more licence is given. Every show becomes creatively charged by all the people in the room. I suppose I’m attempting to create a republic. If not quite that, then at least a conspiracy in a room near London Bridge. I think all theatre is a form of conspiracy.

It was originally staged in 2012, why have you decided to bring it back?

The play was commissioned by the RSC as part of the World Shakespeare Festival. It accompanied a main-house production of Julius Caesar and the actor who played Cinna the poet in that production was my Cinna – Jude Owusu. (Jude was fantastic. He and I worked together again on a Unicorn Theatre production Jeramee, Hartleby and Oooglemore in 2017. He’s currently in The Taming of the Shrew at the Globe.) Back then, I wrote the play for an intimate space but it was put into mid-scale venues and then filmed. I wanted to return the play to its small, live, interactive roots. This is a play that exists inside an audience. I’m also interested to see what changes when it’s performed by the writer. It’s a play about writing and it feels good to have the writer in it.

Why is Shakespeare’s unluckiest character the right person to tell this story?

The play is the fifth in a series I’ve written that take a minor character from Shakespeare and riff in their margins. Cinna is a perfect candidate for this process. He has 17 lines in Julius Caesar before he’s mistaken for someone else and killed by a mob. Shakespeare gives this random, violent fate to a poet. I think this is Shakespeare taking a jab at himself. He kills the poet. The question in Julius Caesar (asked by Brutus of another poet) is ‘What should the wars do with these jigging fools.’  This question is at the heart of my Cinna’s existence. He asks, ‘What use is poetry when the tanks are in the street?’  Cinna’s sense of marginalisation and alienation at a time of social upheaval feels like the perfect place to start unpacking the state we’re currently in and how artists should respond to it.

How well does Julius Caesar and 21st Century politics combine?

How well does a hand fit inside a glove? Depressingly, the story of an over-bearing autocrat and the dismantling of democracy feels very relevant at the moment. I, Cinna (the poet) feels more pertinent now than it did in 2012. It explores the relationship between the artist and the world. I belong to an artistic community that has felt pretty powerless as the world has spiralled away from us. What do we do? That’s a question Cinna asks over and over again? Do we keep writing?  Do we write overtly political work? Do we find our politics in form? Or do we take to the streets?

The audience play a big role in I Cinna, what excites and also scares you about that?

The audience is who we make theatre for. And they’re different at every show. I’m always excited by this process. The play attempts a transfer of creativity away from the stage and into the audience. The culminating action of the play is written fresh during the performance by each audience member. Prior to this moment, the play sort of acts as a set of notes to work from. Notes about a poet, about equality, violence and political engagement – and Shakespeare’s Julius Caesar.

Notebooks and pencils are provided.

What would you say to anyone thinking of coming to see I Cinna (The Poet)?

I, Cinna (the poet) was written for ages 11+ but it’s not just for young people. It tries to do something live and untested at each performance. I think I would say to anyone thinking of coming to see it,  ‘be open to the offer in this play’. It’s given with great consideration and, I hope, generosity. If you’re only happy in a theatre sitting in the dark and watching actors acting to each other, then step outside your comfort zone and come write with me.

First Casting Announced for ‘Dear Elizabeth’ at the Gate Theatre

All-Star Line up Announced for Nassim at Bush Theatre