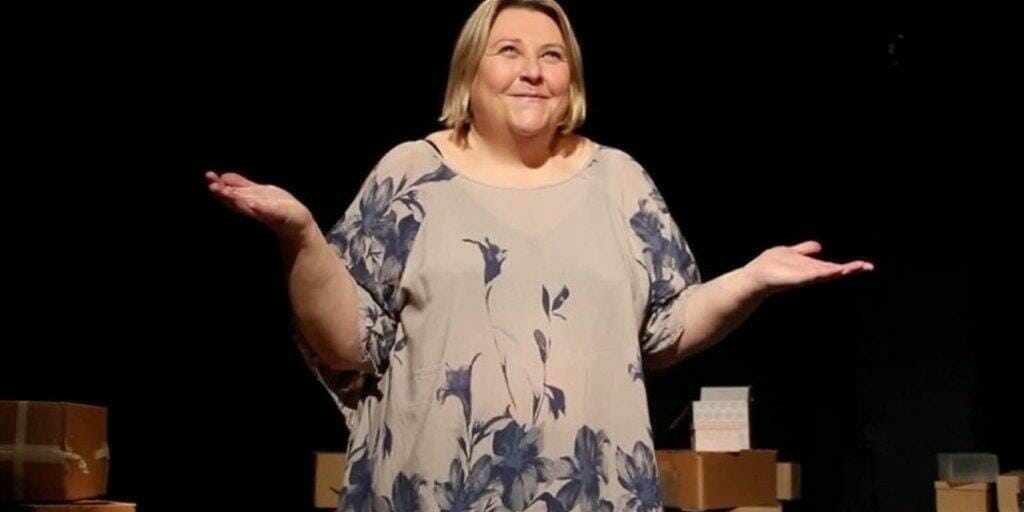 Which boxes do you put yourself in to, or perhaps most importantly, which boxes do others attempt to squeeze you in to?  As an actor, mother, daughter and countless others besides, Joann Condon has found herself placed in to all sorts of boxes over the years, and in her one woman show, Little Boxes, playing at VAULT Festival, she shares many of these experiences with her audience.

Unsurprisingly, the stage is littered with cardboard boxes, and not all of them are little, but then not all of Joann’s hopes and fears can be described as small. She tells us at the outset that she has decided to sort through them, and either understand them or bin them, a daunting task that many of would shy away from, but this is a show which embraces it.

A naturally warm and engaging performer, Joann, who Little Britain fans may recognise as ‘Fat Pat’ takes us through the highs and lows of her life so far.  A part of that is her career, and how she came to realise that she could embrace being a “fat actress”.  For anyone connected to, or knows someone in the industry, it is a painfully astute summary of trying to make a living out of being anyone but yourself.

You might expect an actor to find themselves being categorised into these different boxes, but this insightful show makes us realise that we are all judged in some shape or form, and we are all placed in little boxes by others.  Part of the appeal here is that we don’t need to see Joann as just an actress to understand, because it is her whole life that shapes the narrative.

This review probably places Joann in one or more boxes, but she puts herself in boxes too.  Most noticeably, it is the ‘fat’ box that gets the most attention, and it’s clearly something that has played an influential role in all aspects of her life.

In the most part, Little Boxes is charmingly comedic; the natural kind of humour that comes from real people talking about their everyday lives,  her internal dialogue often followed with “I didn’t say that” helps to create this sense of witty storytelling.  But there are poignant moments too, and they are often the kind that make you pause for thought.

Little Boxes unwraps the thoughts and feelings we all experience but perhaps choose to keep stored away.  In breaking free of her own boxes, Joann Condon may just encourage us the rest of us to do the same.