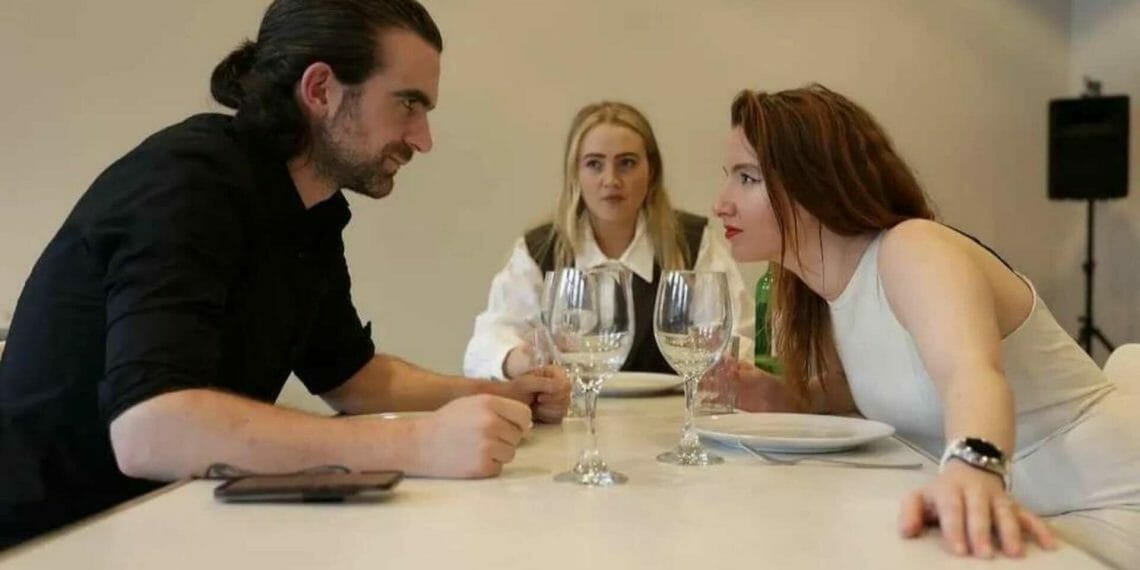 Closure Courtesy of the Company

Every guest at a dangerous dinner party should expect a few twists, but Ink and Curtain’s Closure is surprisingly relentless in catching its audience off-guard. Produced in association with The Pleasance and HOME Manchester, the show is written by Faye Draper and directed by Maz Hedgehog. Draper is joined by Nina Holland-Smith and Conor Burns to unleash vengeful uproar in Pleasance Courtyard (Baby Grand).

The show begins as Laura and her boyfriend Alex arrive at Mia’s flat for an evening of risotto and wine. The characters are immediately identifiable – or at least they appear to be. As the three begin to expose each other’s secrets, they begin to question whether they will make it out alive. There is a trigger warning worth mentioning, and the show delivers a loud response to silenced issues concerning feminism, sexual assault, class, and privilege.

At first, some of the tense moments feel incredibly slow and the snaps between drama and comedy are a bit disorientating. This is only until it becomes clear what Closure is, however. This is not revealed straight away, but the revelations produce an exhilarating momentum. Once the show establishes itself, it becomes remarkably cunning and witty.

Mia is played by playwright Faye Draper, who manages to turn even the darkest and simplest lines into excellent comedy. Nina Holland-Smith plays the role of Laura, delivering some of the best acting I have seen at this year’s Fringe. There is a lot to balance with the character of Alex, and Conor Burns does so with skill and consideration. The radical transformation of the actors from their characters into themselves during the bows is a real testament to their acting abilities.

Without spoiling anything, the psychopathy of the show’s villain is emphasised to such an extent that they appear more exceptional than commonplace at times, which is perhaps not intentional. Nevertheless, the show remains politically significant in a very clear way, and its interrogation of what “closure” means is both disturbing and brilliant.

The dark humour and triggering content of Closure signals its refusal to drop subjects that should not be dropped. If you are unable to catch the show before the 29th August, it will be performing in Manchester for HOME’s PUSH Festival in 2023.