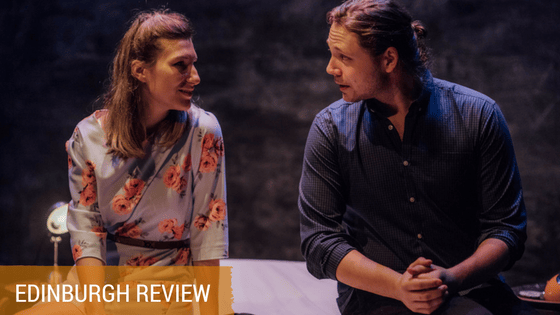 Based on Yuval Harari’s Sapiens: A Brief History of Humankind, New Diorama Theatre’s Secret Life of Humans is already set for a 2018 London run.  It’s sure to be a big hit, because the Edinburgh Fringe run looks and feels every bit like a major London production.

Written by David Byrne and co-directed with Kate Stanley it attempts to tell three connected stories all at once.  The first takes place over the course of one evening, the second over a number of years, and the third across the entire history of humankind.

Dr Jacob Bronowski is a renowned mathematician known for his TV appearances.  Fifty years after his death, his grandson, and date for the night, enter a secret room that was always locked, and uncover a treasure trove from the past which will alter Dr. Bronowski’s reputation forever.

It is a visually stunning production; the backdrop is a giant chalkboard and is often used for video projections, sometimes, it’s used for other things but I won’t ruin that surprise.  The secret room is made up of bookcases which spin in and out and help to move the story form the present to the past, and back again.

As well as looking good, Secret Life of Humans, captures a curiosity within us all; we all want to know what secrets lie behind that locked door, and we are all as shocked as the characters to discover what we do.

Secret Life of Humans perfectly captures the curiosity that lies within us all, and highlights how that curiosity can have some detrimental effects.  A beautiful production which is making its mark on Edinburgh before an upcoming London run.