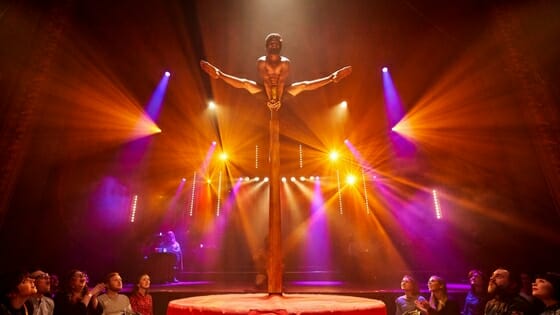 La Soirée has also announced its latest new act.  By special arrangement with their friends Les Beaux Fréres, La Soirée is delighted to present Leon Fagbemi and LJ Marles in La Serviette.  With exceptional skill and brilliant comic timing to boot, this pair of cheeky fools will showcase hilarious tricks and surprising challenges that most of us wouldn’t even dream of attempting.

Earlier this week we got a sneak-peek at the newly renovated Aldwych Theatre, which will see La Soirée performed almost in the round.  The front of the stalls have been removed and replaced with a podium and new seating, while the stage plays host to more seating with tables.

During our first-look we were treated to performances from four acts from the La Soirée family.

This phenomenal UK exclusive from Rajesh Amrale and Rajesh Rao, is straight from the streets of Mumbai.  Mesmerising yet immensely powerful you’ll be astounded by the amazing and ancient art of Mallakhamb.  Rarely performed outside of its homeland of India, this pair of awesome acrobats will blow you away with their extraordinary mix of unparalleled strength, sensational speed and spectacular skill.

This outrageously talented pair first caught La Soirée’s attention over five years ago and they have been nurturing this cultural exchange for all these years.

With breath-taking balance and pinpoint precision, this home-grown Hackney talent is wowing audiences all over the world with his revolutionary new aerial concept.  Entrancingly ethereal, LJ Marles is taking aerial straps to new heights; strength and grace coalesce for fearless physical feats which push the edge of aerial artistry.

Fancy Chance has been hair hanging since 2007.  Self-taught and a bit nuts for doing so, she’s been dangling by her locks, doing one woman shows, dragging it up as Prince, burlesque-clowning it and causing general mischief for over a decade around the UK and the globe.

Watching the captivating Lea Hinz onstage, one would never have guessed that she nearly gave up the world of performing for medical school!  Record-breaking, six-time German Rhythmic Gymnastics Champion, Lea’s fusion of enchanting grace and flexibility, combined with dynamic power and impressive strength, gives aerial hoop a unique spin!  This dazzling aerial artist, will be sure to leave you feeling sky-high!

We were totally captivated with the four acts that we saw, and can’t wait to see the full show.  There’s clearly nothing else like this on a West End stage at the moment.  La Soirée’s heady cocktail of intimate cabaret, comedy, circus sideshow and contemporary variety from across the globe is more potent than ever and this is their most daring line up to date.

Open Auditions to Find Young Star for Tina The Musical