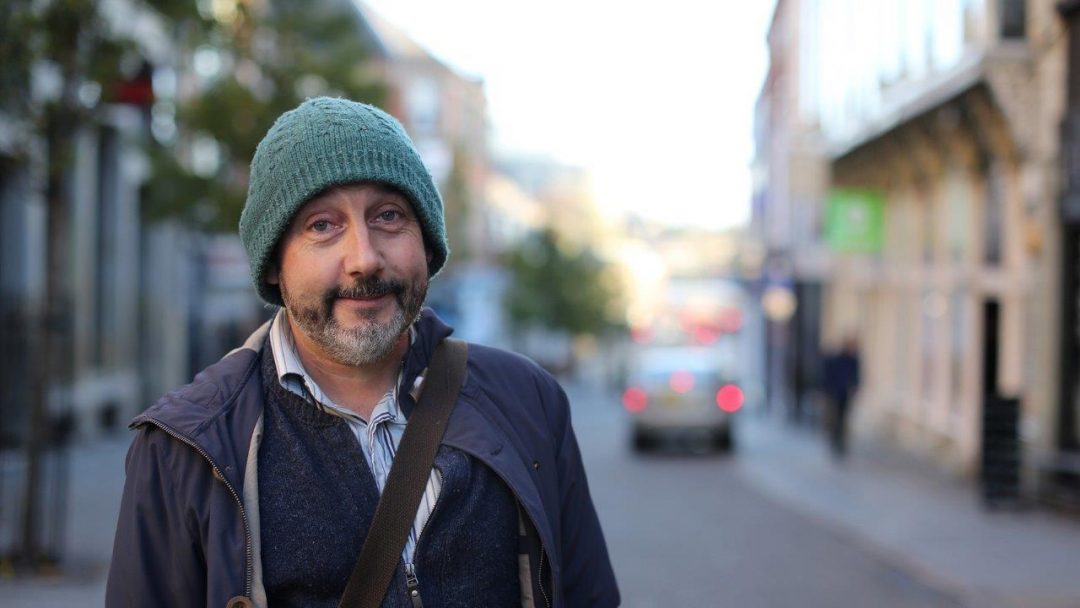 Award-winning playwright Andy Barrett and director Giles Croft revive Tony’s Last Tape, a timely play based on the diaries of one of Britain’s most respected, divisive and celebrated politicians. After a sold-out run at Nottingham Playhouse, Philip Bretherton reprises his much-celebrated role as Tony Benn.

You are reviving your play, Tony’s Last Tape at The Omnibus Theatre, what can you tell us about it?

Tony’s Last Tape is a one man show that takes the form of Beckett’s Krapp’s Last Tape to explore the life of Tony Benn. Fortunately Benn was a keen diarist, who recorded his thoughts and on a much more frequent basis than Krapp. And fortunately, as I was to discover, there are a number of other very useful similarities as well. If the Beckett play is a raging against the dying of the light then this play is one that explores the sense of a man who is trying to weigh up his own legacy at the end of his life. It’s a play that really tries to convey the personal and the political, and to navigate a way through the post war political landscape as well as the career of one man.

It wasn’t my idea! Benn was due to speak at the Playhouse not long before he died and I think this was the impetus for Giles Croft to consider the idea of doing a show. I’m presuming that once the title popped into his head it all kind of made sense. When he mentioned it to me I was hoping he would ask me to write it. Luckily (for me at least) he did.

How did you find out about Tony Benn’s tapes, and what did you think when you first heard them?

I haven’t heard them. The tapes were transcribed and selections from them have been published in a number of volumes, so I read all of those. They were fascinating and I recommend them to anyone who wants to get an insight into the history of the Labour party since 1945 and of British parliamentary politic in particular. There was more humour than I was expecting, and they also conjured up a world that seems to have vanished; one occupied by politicians who having lived through the Second World War (and perhaps served in it) truly understood the idea of the collective effort. Interestingly when Benn’s eldest son, Stephen, came to see the show he brought with him the very last cassette recording that his father had made – Tony’s last tape.

There’s an accompanying exhibition, what can you tell us about that?

It’s a called POWER: Missiles; Miners & Money and it consists of a series of Voice Portraits or sonograms on canvas made by Tracey Moberly using the voice of Tony Benn. They worked together on the project in 2005 and it’s only the second time they have been exhibited. We’re thrilled that she’s agreed to display them during the run of the show at the Omnibus.

Why have you chosen now for a revival?

Because it really does seem as though the British public are thirsting for new ideas and new identities in politics, and although Bennism is absolutely connected to a post war democratic socialist agenda, it is clear that it is the idea of the democratic act that underpins Benn’s thinking. This sense of people feeling disconnected to the process of power and government, of lacking voice and agency, is something that is going to have to be dealt with. Once we have finally managed to steer some kind of course through the endless quandary that is Brexit, and when the political parties have settled into new formations as a result of their own divisions over this, then I think there is the possibility for a genuine debate about the kind of society that we may want to look to create. Benn was an idealist but his ideals come through a long tradition of bottom up politics and his kind of provocations are still intensely useful.

What do you think Tony Benn would have made of the political landscape right now?

That’s a really difficult question. I think Brexit would have been a major issue for him as he was very clear that the European political project was something that he saw as being intensely undemocratic. Corbyn was keen student of Benn’s and you can see in his stance how ambivalent he feels about the issue. I think Benn would have been helpful in making a leftist case for leaving Europe and would have caused even more problems within the Labour party over this issue. He was also clearly no lover of the New Labour project and would have been delighted to see Corbyn and McDonnell running the party. I can’t imagine he would have viewed the Conservative leadership – particularly May’s u-turn over her positioning on Europe – very kindly.

Do you think Tony’s Last Tape will change how people think about Tony Benn?

It’s difficult to know what people bring to the show. For some there’s an interest in seeing it because Benn is no longer around, that this is some kind of Benn Tribute Act. It’s not that but it does really try and get to the heart of the man and this need is generally satisfied. For some of the younger members of the audience it’s been helpful in developing an understanding of a certain strand of British politics. But ultimately I’m interested in it as a play as much as I am about it being about Benn; and I would hope that even if you knew nothing about the man at all, or had no interest in him at all, that there would still be enough in it in terms of the emotional arc of the central character to find it a moving and witty evening out.

What do you like most about Philip Bretherton’s portrayal of Tony Benn?

Philip has absolutely made Benn his own and whenever I read anything of Benn’s now I can only see Philip in my mind. It’s a performance that is really detailed in every aspect of its emotional journey and which is full of both frailty and strength. It’s an unbelievable honour to see someone turn your words to life in that way.

What would you say to anyone thinking of coming to see Tony’s Last Tape?

I’d say that’s a very good idea indeed and unless you definitely have something better on offer then you should act on your instincts. It’s been really well received everywhere it’s gone and I’m confident that you won’t be disappointed. And this time you have the added bonus of the Tracey Moberly exhibition as well.

First Look: The Cast of The Understudy in (Isolated) Rehearsals

Stephen Fry, Emily Atack, and Russell Tovey to Star in The Understudy, a New Radio Play To Raise Funds For The Theatre Industry