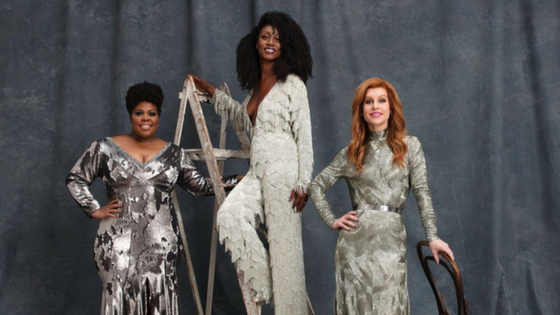 The ‘Leading Ladies’ are releasing “Songs From The Stage” – an album of unforgettable songs from great musicals like “Hamilton”, “Cats”, “Rent”, “Dreamgirls”, “Funny Girl”, “The Bodyguard”, “Memphis” and “Beautiful” and many more. “Songs From The Stage” will be released on 17 November 2017 through East West Records (Warner).

We caught up with Beverley Knight and Cassidy Janson to find out how this unique album came about.

How did the three of you get to know each other?

BEVERLEY: We didn’t know each other previous to this project! I took it to my label to reach out to them both to make this album and thankfully they both agreed. The rest is history!

Where did the idea of doing an album come from?

BEVERLEY:  Blame me! I saw CJ in ‘Beautiful’ and Amber on the Graham Norton show promoting ‘Dream Girls’ and the idea was born.

CASSIDY: It was all Bev’s idea! She saw both Amber and I and had the idea of collaborating

How did you choose the songs to include and was it difficult to choose?

CASSIDY: We had a long list and we worked on the final 14 together chatting and debating.

BEVERLEY: We cut songs… then we added others…. and agonised! In the end it came down to practical things like, not having too many ballads or too many songs sounding similar.

Tell us about the recording process and did you have fun recording the album?

CASSIDY: We had a ball, it was very organic and easy, lots of mutual respect and fun.

BEVERLEY: The recording process was smooth, and we worked quickly. It was great fun as we worked through each song together, whose singing what line and where. The harmonies were easy! We naturally fell into our parts.

These are massively famous songs, how have you given them a Leading Ladies twist?

BEVERLEY: Some solo songs are shared among us, other songs have harmony where previously there were none. A couple of songs have tempo/key changes. It’s the Leading Ladies effect!

CASSIDY: We’ve vocally arranged all the songs ourselves. We’ve given them all a bit of magic…we hope.

What surprised you most about the other two leading ladies when you started working with them?

BEVERLEY: The cohesion with our voices! No one could have predicted how well we would blend together! It was fantastic finding that out from note one!

CASSIDY: Bev’s down to earth and warm. Amber’s sweet and chilled attitude. And also how amazingly our voices blend!

Do you think we’ll get the chance to see all three Leading Ladies on stage together?

Leading Ladies: Songs From The Stage is Released 17th November and can be pre-ordered here.

Tickets Go On Sale for Tonight at The London Coliseum

Marry Me A Little and Peter Pan Join The Barn Theatre...