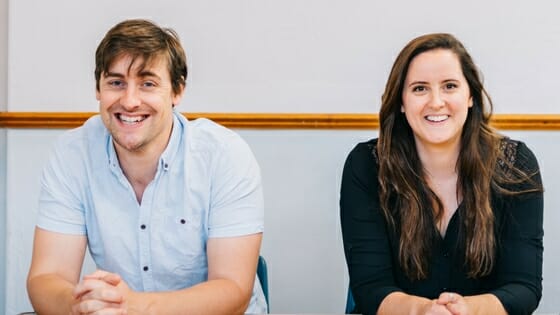 New Old Friends are an award-winning theatre company dedicated to creating original comedy theatre, founded in 2008 and run by husband and wife team Feargus Woods Dunlop and Heather Westwell. Previous shows include Silly Songs of Shakespeare, Anti-Panto! and Mate. In 2014 and 2015, New Old Friends took their adaptation of Anthony Horowitz’s The Falcon’s Malteser on two national tours and to the Edinburgh Festival Fringe, enjoying sell-out shows at the Pleasance and great critical acclaim.

New Old Friends return to Lichfield this winter for more seasonal shenanigans after the runaway sell-out success of Crimes Against Christmas last year, with not one but two shows: Home for Christmas for kids and Crimes on the Christmas Express for adults.

Feargus and Heather took the time to speak to us about their busy festive season.

You’re returning to Lichfield with two shows this December after the sell-out success of Crimes Against Christmas last year, what can we expect in 2017?

F: We have Crimes on the Christmas Express, which is another night out for adults. It has a thriller element, a romance element and lots of silly characters doing silly things played by just four actors.

H: This time around it’s more of a heist movie style, than a murder mystery. But that doesn’t necessarily mean everyone makes it to then end.

F: Our other show is Home For Christmas which is for early years audiences and families.

H: It’s a lovely little story about a Mum desperately trying to get all her jobs done before Christmas and make it back before the snow.

F: There is rhyming, singing, puppets and comedy throughout.

F: Ultimately we are always trying to make the best show possible, but things like pacing and references are important to consider.

H: We are an Associate Company at Theatre Royal Bath’s egg, which is one of, if not the, premier theatres in the world dedicated to children’s work. So we get to see a lot of incredible theatre for young people. The work that does best often has a strong audience surrogate in the story.

F: That’s something we’re always aware of, but particularly with shows for young people. Also, a sense of fun (hopefully) goes across both audiences.

Your work is always created and toured regionally, what is it that you love about regional theatre in the UK?

F: It is the lifeblood of the whole theatre eco-system and where so many people have their first, and recurring access to performance.

H: We genuinely love seeing new places and then revisiting venues where we start to know audiences.

You run the company together and a husband and wife team, how do you prevent the shows taking over your lives?

H: We try and carve out ‘non-NOF’ time where we don’t talk about work.

F: Heather’s better than I am at that. But inevitably the lines do get blurred.

H: Luckily we really do love what we do, so it’s not really working.

What others crimes can we hope to see in the future?

H: In spring 2018 we’re touring ‘Crimes Under The Sun’ which is loosely inspired by Agatha Christie’s Evil Under The Sun.

F: Very loosely, with a hint of Brief Encounter and some other bits and bobs.

H: It is set on the English Riveria and includes a big song & dance number according to our director.

And seeing as you must now be experts, how do you commit the perfect crime and get away with murder?

F: It helps if you’re locked on an island/train/hotel with a dozen people with an equal motive as you.

H: Fearg, don’t give away the secrets.