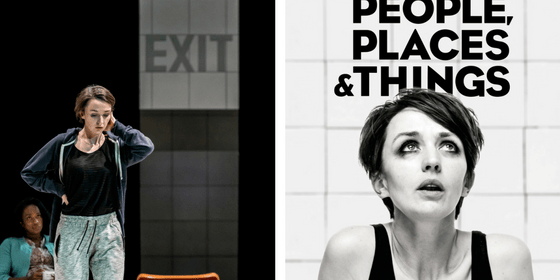 Following a critically-acclaimed, sold-out season at the National Theatre and in London’s West End, People, Places & Things has embarked on a major UK tour for Headlong in a co-production with the National Theatre, HOME and Exeter Northcott Theatre.

We spoke to Lisa Dwyer Hogg, who plays Emma, an actress whose life has spun recklessly out of control because of her addictions to drink and drugs.

You’re playing Emma in Duncan Macmillan’s People, Places & Things, how did you find out you had landed the role?

I met with Holly, Duncan, and Jeremy back in May. I was actually en route to the airport when the audition came in – always the way! But I was delighted, I knew how special a job it was and it was an honour to be chosen to tell Emma’s story.

Did you get to see it when it was recently at Wyndham’s Theatre, what did you think?

Yes, I saw it near the end of the run in the West End. I was blown away by the whole production. The visual concept was incredible. The design, music and lighting all created such an intense experience. Of course, it goes without saying that the acting was beyond superb. Duncan has written a very important piece of work that deals with the issue of addiction and recovery in such an intelligent and visceral way. He taps into the basic human dilemma of survival in a world that is ultimately out of our control. I think people are so moved by his writing because it’s honest, and when you identify it’s undeniable. He has also written an amazing central role for a woman and that is not something that happens a lot.

Can audiences on the tour expect something similar to The West End run?

I think they can expect to see an exciting, truthful and powerful piece of work. The set is the same and all the technical elements remain, the music, visuals and lighting. Our cast brings new life and new interpretations to the characters, but ultimately the heart and soul of the play remain the same.

With Emma being an actress, can you identify with the character?

Absolutely. Sometimes it is easier playing a character than being yourself! Real life can be very challenging compared to being onstage saying lines you have learned. I think many people will identify with Emma, even if they are not an actor. She is grappling with the fundamentals of what it is to be a human being in todays chaotic world and she’s not afraid to ask the questions even if they are confrontational. She’s searching for a way through. I think we can all identify with the challenge of living life on life’s terms.

I’m so excited to bring this play to other cities, to the people who didn’t get to see it in London. I do not underestimate the importance of this play and how it can influence audiences and so it is a great honour to be taking it on the road. I’m grateful for the opportunity to tell this story.