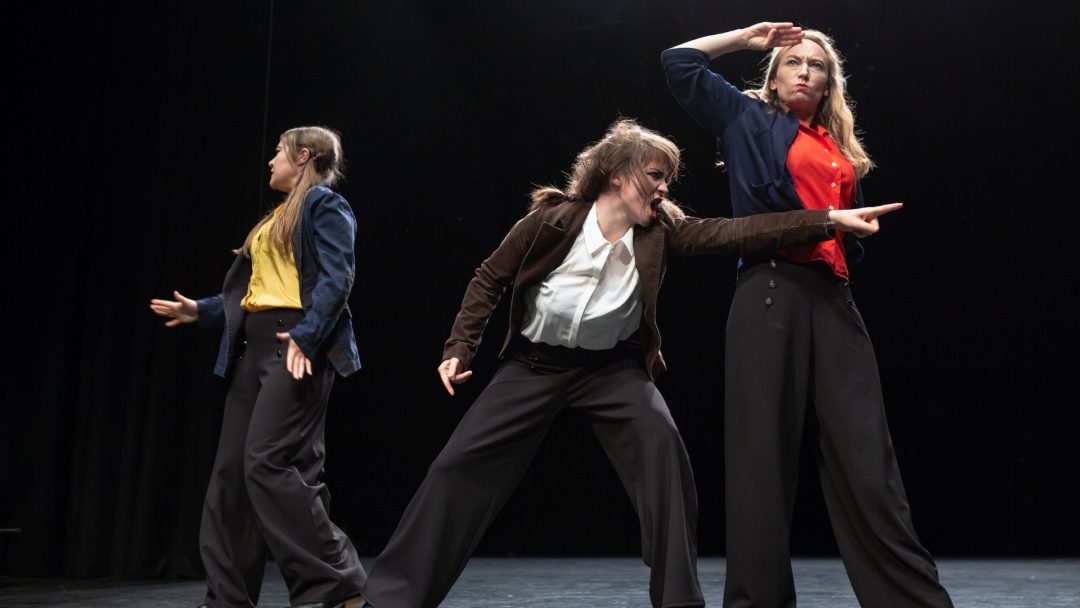 As we approach the centenary of the 1918 Armistice, Bent Architect Theatre Company draws on two years of work with academics at the University of Leeds and across Germany to bring to light the hitherto untold stories of the women behind the Kiel Mutiny of 1918.  We spoke to writer Mick Martin to find out more.

Women of Aktion is heading out on tour, what can you tell us about it?

That it delves into an absolutely fascinating trough of almost completely untold history. It explores the role of ordinary working class women in the German revolution, the roles they played in the Kiel Mutiny which ultimately brought the First World War to an end. Our central thesis is that these women played a huge role in ending the war, and the reason that history doesn’t record that is just that – it’s because history hasn’t recorded that. But it doesn’t mean that they didn’t do it. The more we looked at the material the more we felt this is incredible that nobody has looked at these events through this female led perspective before and if it hadn’t been for Professor Ingrid Sharp of Leeds University, and my colleague Jude Wright’s amazing research too we wouldn’t have been able to look at it at all.

What made you want to write about the women behind the Kiel Mutiny?

I didn’t know much about it until we began the collaboration with the University and Professor Ingrid Sharp. German Women’s History is her specialist area, and the role of women in the German anti-war movement of 1914-18 a specific area that has not been researched. Ingrid saw our 2014 piece England, Arise about the Hudderfield Socialist conscientious objectors and was really keen to work with us researching a new piece, a kind of sister piece that looks at the story from the other side, the German, and specifically the female side.

The moment Jude and I read about the Kiel Mutiny we could see that it is hugely significant; it is the spark that actually ended the First World War – and therefore contradicts the standard British narrative that that ‘we won’, that British militarism succeeded. It became clear we didn’t win, nobody won. The war ended when the German people refused to continue. Secondly, how the scale of the food shortages, the endless food queues and riots in Germany played a huge role in fermenting the discord and unrest that gave rise to the revolution. And women were very much at the heart of that.

So, in one sense the real story of the Kiel Mutiny is what precedes the actual mutiny, the gunfire, it is a story of a women’s revolution, a women’s war that was not about guns and ammunition, but about the opposite of that. The sailors aboard the ships the confidence to refuse orders that were effectively a suicide mission – because they knew they had mass support in the city of Kiel. That ordinary people, especially women, really do have this power is something that needs to be shouted form the rooftops.

How did you go about researching the play?

We undertook 3 separate research to trips to Germany. At the outset we didn’t have any clear idea what story of the German anti-war movement at all. Only as Jude delved deeper and came across the name of Gertrud Voelcker, a young woman who worked in the union office in the city of Kiel, did the Mutiny come into focus. There were trace mentions of her on the internet but very little of substance. We needed to go to Kiel and research further.

Did you face any challenges when researching?

Unfortunately, the response to us in Germany was often a little blank. People asked us why we were interested in the First World War at all? It doesn’t resonate there as powerfully as it does here; it seems to have been obliterated by the second war, and by the subsequent division of the country until the wall came down in 1989. When we persisted, we were then often told that women played no role, as there were no women on the ships, so there were no women in the mutiny. In Kiel we went to the local archives, and asked the man there for information about Gertrud. He very politely shook his head and said there was none (awkward).

Jude asked could he at least have a look through the archives for us. It was quite some time later that he returned, armed with files and folders on Gertrud which he never knew existed. Hidden away in one of them was her memoir, written many years later, her story of the Kiel Uprising and her role in it. As we went through it – and Professor Ingrid translated paragraphs into English for us, we knew we had a start.

And when we (okay, Jude again) discovered that the only stage play about the Kiel Uprising is Draw The Fires by Ernst Toller – and that the first production of it was in Manchester by the legendary Joan Littlewood, in 1935, at the very start of her career – we felt we had a way to tell the story.

What are you most looking forward to about having the play out on tour?

Seeing how our story resonates with people today, if audiences can connect it with the contemporary challenges faced by anti-war movements, by women all over the world. We have three brilliant female actors, who play a whole multitude of roles and as they settle into the play the story telling and characterisation is coming into focus more and more. I think we have crafted something that is both verbatim and imagined piece, it is highly stylized, operates on several levels and has layers of storytelling woven together with songs and music –  all three sing beautifully.

What would you say to anyone thinking of coming to see Women of Aktion?

That they will be informed, entertained and powerfully engaged with a story of strong women. A close friend saw it on the opening night and said it made him very emotional because it made him think of his mother when she was a young woman, and was very passionate and politicised. That’s good enough for me.