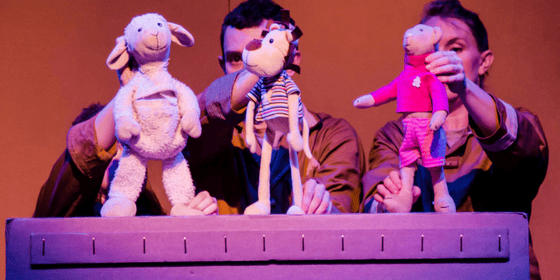 Turtle Key Arts have partnered up with Slot Machine Theatre for Your Toys – an innovative family show that incorporates the children’s toys as puppets into the story.

Using their unique style of puppetry, original live music and quirky humour, Your Toys takes your childs beloved friend on a gigantic adventure. Enjoyed by both adults and children, there is no limitation to whose toy can take part. Everyone is invited to hand in their toy at the beginning of the show to see them included in this magical journey. We caught up with Artistic Director at Slot Machine, Nick Tigg.

Your Toys is heading out on tour, what can you tell us about it?

Your Toys is a show for 4-9 year olds – they bring their own toys to the theatre, we ask if we can borrow them for the show, then we make our show with their toys – so we don’t bring any pre-made puppets with us, the children’s own toys play all of the characters in the show – that means one day we might have a dinosaur playing one of the lead parts, the next day it’ll be a hedgehog, then a Barbie, and so on.

Because of this, every show we do is completely unique – the show one audience sees will never be repeated.

The show itself is an epic adventure, in which two characters are shipwrecked on a strange island, and find themselves, along with everyone else on the island, pursued by a monstrous beast. After many adventures, they manage to help the islanders defeat the monster. There are elements in Your Toys of some of the very well-known epic stories – Gilgamesh, The Odyssey, Lord of the Rings, Harry Potter – magic, adventure, grief, betrayal, love, all those huge themes.

What are the challenges of making a show for children?

We make work for adults, families and children, and have always, as a company, applied exactly the same principles and rigour to all of our shows, regardless of who they’re aimed at – there’s no difference in the level of skill required for any of them, just a different age range on the poster.

We’ve made quite a few shows for children now and some things are very clear from our experience: language is incredibly difficult to process, it takes a lot of brain power, and for this age group you have to be careful not to overload the piece with too much text. We try to include as much movement, dance and music as we can!  When we first thought of this idea, we really wanted the impetus for the story to come from children. To make this happen, we organised loads of workshops with children, and we simply asked them ‘what do you want in a story?’ – then we listened, without comment, to what they said. We tried out some ideas on them, improvising with their toys, and asked them what worked and what didn’t – you can always rely on children for honesty and they came up with some great ideas – one said ‘we want a boy who cries – a lot!’ – it was a boy who requested this, incidentally – so we put in a boy character who cries a lot – another said they wanted mad adventures were strange things happen suddenly and unexpectedly. All of these ideas we’ve tried to incorporate into our show.

Where did the idea come from to use the children’s own toys in the story?

There are 3 artistic directors of Slot Machine – Nick Tigg (me), Fiona Creese and Nicola Blackwell – we work collaboratively, and have done for years – but the original idea came from Nicola Blackwell. I think the initial spur for the idea came from workshops, playing with children and seeing how they play out big emotions and ideas through their toys, through having adventures with their familiar toy – it’s not a new idea to use toys in this way to help children express feelings and so on, counsellors use it a lot, but we don’t think it’s been done in a theatrical context before (as far as we know – there’s nothing new, after all).

We liked the idea that a child would see its toy up on stage playing a major part in the story, and being animated by a brilliant puppeteer – we hoped this would be inspiring, and we hoped that because they had a big investment in their own toy, that sense of investment would transfer to the show they were watching – which does seem to be the case. The other day we had twin matching dolls from twins in the audience – when we started animating the dolls, using them in a very funky

dance sequence, the two twins in the audience started jumping up and down and cheering very loudly – it was brilliant!

Does it make it more difficult not knowing which toys you’ll be using?

In a word, Yes – we have a short ‘casting’ session at the beginning of the show – as children come in we very gently ask if they’d like their toy to be used, then we gather all the toys together and decide which ones we’ll use for what – so we have very little time to do that, quick decisions have to be made – the more we do the show the easier it gets, in a way, since although there are billions of toys in the world, there isn’t a huge range in terms of how they move and how easy they are to animate – plastic dinosaurs can be tricky! Though we did have a really nice soft dinosaur the other day, who was great. And a 3ft flamingo…

How do you think you will compete with the children’s own imaginations?

That’s impossible. ‘Every child is an artist. The problem is how to remain one when you grow up.’ I’m not suggesting our work is Picasso, but he has a good point.

But the point of this show, in a way, over and above the toys being used as puppets, is that our starting point was a conversation with children: What do you want from a story? That was the question we asked – they told us, and now we’re doing it. So the show came from their imaginations. Simple. Sometimes, because the idea of the show, using toys as puppets, is so eye-catching, the work we did to actually create the story is ignored, but it’s just as important, maybe more so. We should all listen to children more, they have some very interesting things to say.

Why do you think it’s important to introduce children to the theatre in this way?

We hoped that because they were invested in their toy, they’d be invested in the show, in a way that they maybe wouldn’t be if they just turned up to the theatre to see a show.

Children do get shunted about quite a lot, go here, do this, sit down, stand up – we wanted to make them feel that they had a lot at stake in this show, that it wasn’t just another thing they’d been told to do, and it certainly seems to be the case that their attention is very acute, as they see their toy playing out different scenarios and adventures.

Also, after the show has finished, we have ‘stay and play’ sessions – so the children get their toys back, obviously, but we then gently encourage them to join the cast and come and play on the set – so the adventure continues, with them using their toy on our set to carry on playing and experimenting, with their own toy interacting with all the other toys that have been brought that day.

We hope that children who see this show will be sufficiently inspired to come back for more.

Your Toys is on Tour, full details and box office contacts available here.