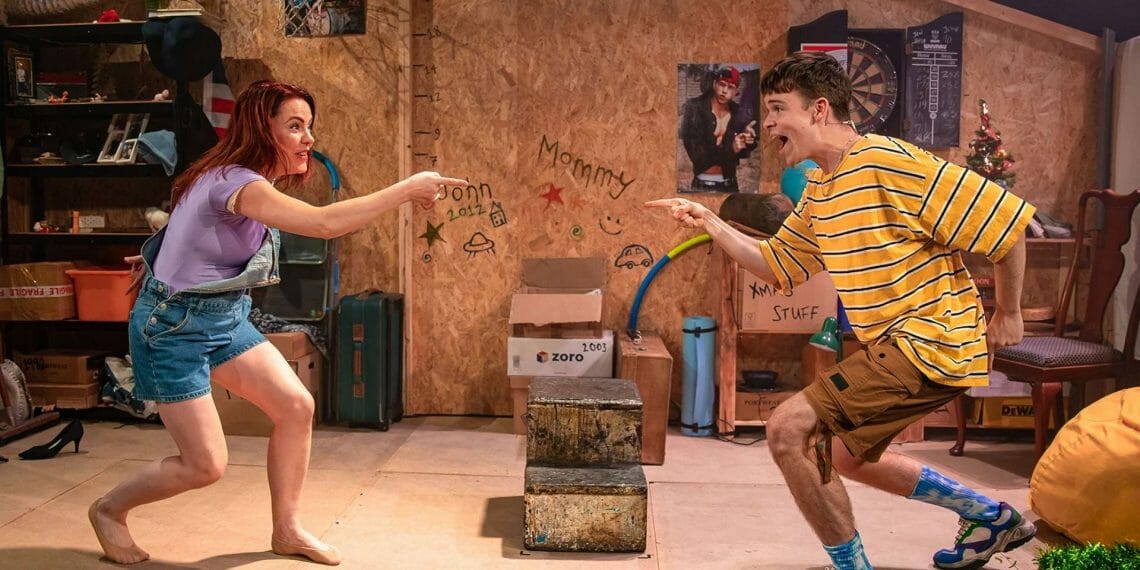 Andrew Lippa and Tom Greenwald’s two hander musical, John & Jen has largely been overlooked, at least here in the UK, since its 1995 opening.  Even an off-Broadway, 20th anniversary, revival failed to spark much excitement this side of the pond.  Yet, it is here in London that a new updated version of the show is premiered, with the Southwark Playhouse playing host to this emotionally charged piece of musical theatre.

In the first act, the title characters are brother and sister, and with an age difference it falls to Jen to protect her younger sibling from the negative influences of their father.  The relationship isn’t perfect, and traditional sibling rivalries occur, but Lippa and Greenwald’s delightfully varied score makes it clear there’s a strong bond at the heart of the relationship.

The second-half-John is Jen’s son, named after the uncle that his mother couldn’t protect in the way that she hoped.  Here the mother/son relationship is examined through the lens of generational differences, and with Jen unable to let go of the feelings she still holds towards her brother, John junior becomes increasingly suffocated and rebellious.

The original John & Jen spanned from 1952 to 1990, but in this new version, directed by Guy Retallack, the story begins in 1985 taking us right through to 2022.  Jen’s sixties hippy era is replaced with smoking pot in New York City, and John’s high school years are laced with more modern features.  This is a musical that moves at quite a pace, often skipping ahead multiple years, so the cultural references do help keep us on point.

In the title roles Rachel Tucker and Lewis Cornay have an exquisite chemistry. Rachel Tucker is, unsurprisingly, incredible in the role of Jen, belting out these huge numbers like this was the Palladium, rather than the cramped space of Southwark Playhouse’s The Little, but under Retallack’s fluid direction, there’s intimacy too.

The real surprise of the evening though comes in the form of Lewis Cornay.  In an exceptional performance, Cornay more than keeps pace with his more experienced co-star, easily differentiating his two characters, on top of playing them at various ages.  The combined fire-power of Tucker and Cornay alone make John & Jen worth the ticket price.

Natalie Johnson’s set design, a chipboard attic, reminds us of the importance of the family home and sibling bonds in this musical, yet this could never be described as a one-issue production, as the characters progress through their respective lives, there are conflicts, both internal and external, bearing down upon them. Maybe it all moves too fast, but each fork in the road is essential to this story.

John & Jen is by no means a light-hearted musical romp; it explores some troubling themes with immense sensitivity, but it also captures the human spirit in a very humorous way. Andrew Lippa and Tom Greenwald’s musical resounds with regret and hope in equal measure, but it’s the spectacular pairing of Rachel Tucker and Lewis Cornay that seals the deal.

John & Jen is at Southwark Playhouse until 21st August 2021.