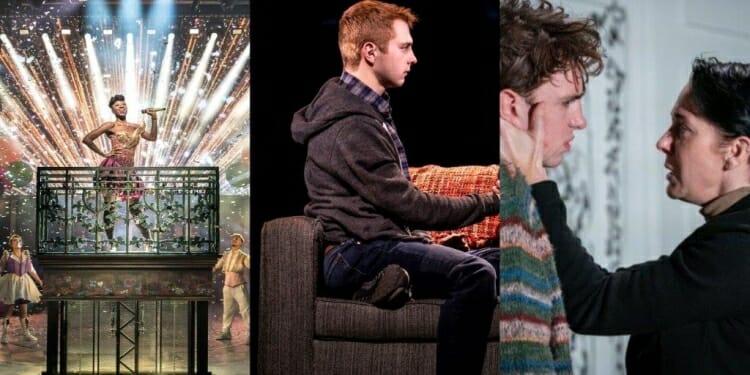 After another thrilling year in the West End, we look back at our pick of the top ten West End productions of 2019.

Like our top ten lists? Check out our Top Ten Off-West End Productions of 2019 and Best of The Edinburgh Fringe 2019.

The Night of the Iguana at The Noël Coward Theatre

Thrown together for one eventful night that pulses with conflicting passions and a surprising edge of humour, a group of tourists including Shannon, a disgraced priest and a troubled artist Hannah arrive at a remote coastal Mexican hotel run by the beautifully sensual Maxine. One night brings them together, and will leave them forever altered.

Waitress at The Adelphi Theatre

Katharine McPhee made her West End debut starring as Jenna in the UK premiere of Waitress, having played the role on Broadway. The Tony Award-nominated musical brought with it an all-female lead creative team – a West End musical first.

Numerous cast changes have taken place over the year, including limited stints from well-known celebrities, a UK Tour has been announced when the West End run comes to an end.

Home I’m Darling at The Duke of York’s Theatre

Fiddler on the Roof at The Playhouse Theatre

Direct from its sold-out run at the Menier Chocolate Factory, Tony and Olivier award-winning director Trevor Nunn’s revival of the classic Broadway musical Fiddler on the Roof transferred to the West End’s Playhouse Theatre.

Featuring the iconic score including ‘Tradition’, ‘Matchmaker, Matchmaker’, ‘Sunrise, Sunset’ and ‘If I Were a Rich Man’, and featuring original choreography from Tony Award-winning Jerome Robbins alongside new choreography by Matt Cole.

Joseph And The Amazing Technicolor Dreamcoat at The London Palladium

Jason Donovan made his defining stage performance as the title character of Joseph in the 1990s, at the London Palladium, in a sold-out 18-month run which produced a No.1 single and best-selling soundtrack album.  In 2019 he returned to the Palladium stage in a new version of Joseph, this time playing Pharaoh, alongside Sheridan Smith as The Narrator and Jac Yarrow in his professional stage debut as Joseph.

Come From Away at The Phoenix Theatre

The Tony Award-winning musical Come From Away tells the remarkable true story of 7,000 stranded air passengers during the wake of 9/11, and the small town in Newfoundland that welcomed them. It made its long-awaited UK premiere at the Phoenix Theatre following a limited engagement at the Abbey Theatre in Dublin.

Death of a Salesman at The Piccadilly Theatre

The highly acclaimed, sold-out Young Vic production of Arthur Miller’s Death of a Salesman transferred to the Piccadilly Theatre.

Wendell Pierce, who is best known for his roles in The Wire and Suits, reprised his revelatory performance as Willy Loman with the Olivier award-winning Sharon D. Clarke reprising her heart-rending performance as Linda Loman.

The Son at The Duke of York’s Theatre

& Juliet at The Shaftesbury Theatre

& Juliet – the new West End musical that imagines Juliet’s famous ending as just her beginning – features the music of Max Martin, the acclaimed song-writer of some of the biggest pop anthems of the last 30 years.

Dear Evan Hansen opened on Broadway at the Music Box Theatre to great critical acclaim, where it has broken all box office records and is now in its third year of standing-room-only audiences.  A record-breaking US national tour launched in October 2018 and is currently touring North America.

Making his West End debut, Sam Tutty “gives the performance of the decade”