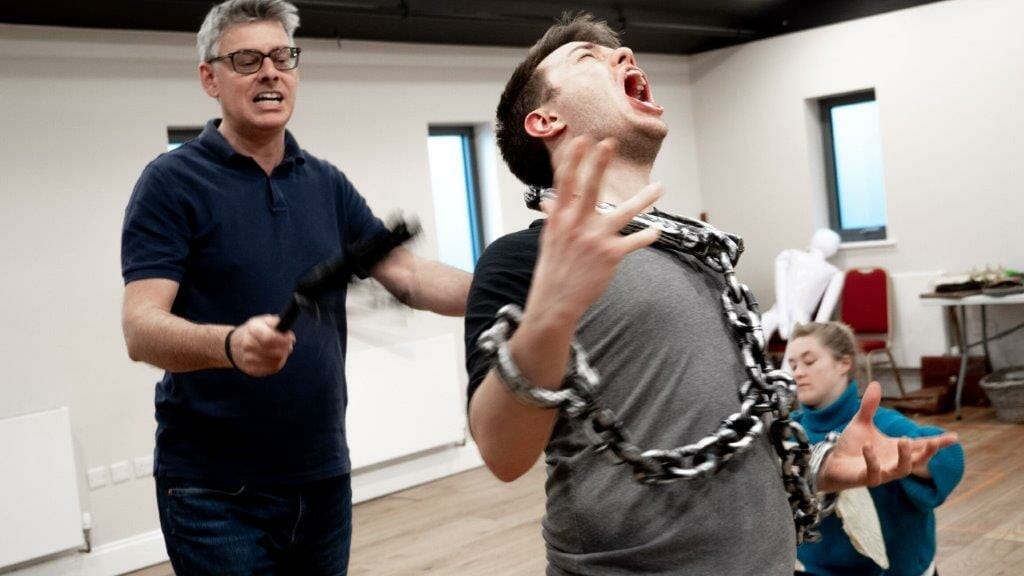 The Barn Theatre have released rehearsal photos for their upcoming Built by Barn production of the comedy Ben Hur by Olivier award-winning playwright Patrick Barlow.

The production, which runs in the historic Roman town of Cirencester from 4 March to 18 April 2020, will star James Dinsmore (Great Expectations) as Edgar T Chesterfield, Liam Horrigan (The Play That Goes Wrong) as Daniel Veil, Devarnie Lothian (Grandpa’s Great Escape) as Omar Lord and Bronte Tadman (A Christmas Carol) as Crystal Singer.

Joseph O’Malley returns to direct, following his previous direction on the Barn Theatre’s successful productions of Hound of the Baskervilles and The 39 Steps. Bronte Tadman also returns to the Barn Theatre after appearing in their 2019 production of A Christmas Carol.

Based on the best-selling novel, General Lew Wallace’s Ben-Hur:A Tale of the Christ and the 11-time Academy award-winning 1959 film adaptation starring Charlton Heston, this stage adaptation asks the question: can four actors in an amateur theatre company pull off this epic tale? Will the backstage drama ruin the show? One thing that can be certain… audiences will be laughing uncontrollably by the end of the evening!

Complete with chariot races, sea battles, and stage combat, Patrick Barlow weaves his compressed style popularised by The 39 Steps into one of the largest stories ever told.

This Built by Barn production marks the second time the award-winning theatre has produced a play by Patrick Barlow, following their successful 2019 production of The 39 Steps, which transferred to Theatre Royal Windsor in August 2019.

Ben Hur at The Barn Theatre in Rehearsal c. Benjamin Collins
1 of 6