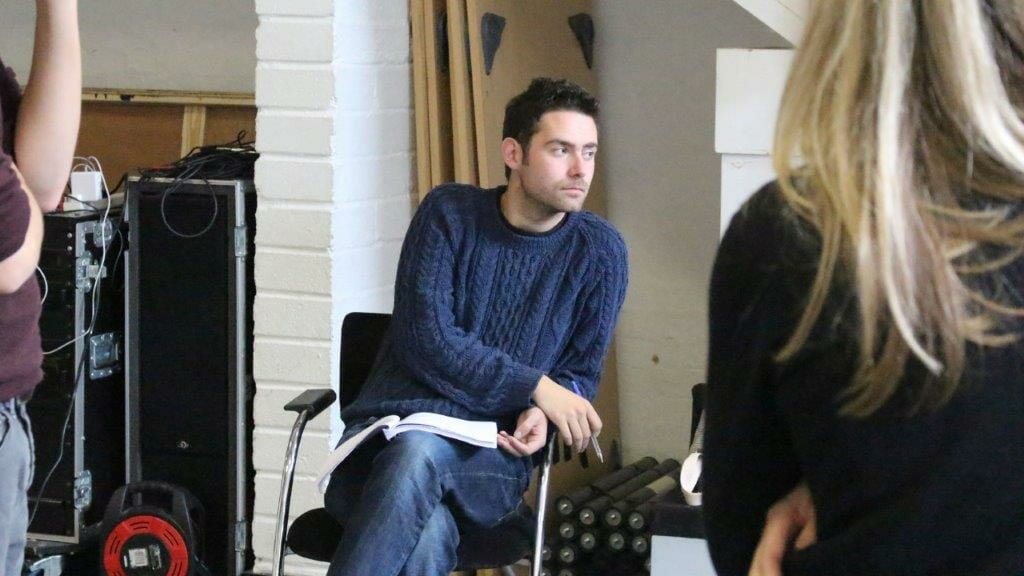 Written by James Fritz, this latest play from bold new writing theatre company Fifth Word and co-producer Nottingham Playhouse focuses on the stages of grief and the ways we find to cope, exploring love, friendship and human connection.

Set in the aftermath of a natural disaster which has struck London. In a small town far from the capital, a young man called Vin can no longer speak. Is it shock? Grief? Or something else? Lava considers what happens to those who can’t express themselves in a world that celebrates self expression, and looks at the lengths we will go to to make sense of our sadness.

Lava is heading out on tour, with a run at Soho Theatre, what can you tell us about it?

It’s the story of a young man called Vin who stops talking on the same day as a national tragedy, and of his family and friends who have to deal with his silence. It’s funny, features four great characters, and is at its heart a vehicle for a totally unique, silent central performance.

What inspired you to write Lava?

The men in my life who have trouble talking about the things that matter to them. That includes myself.

I’ve always been interested in the way different people express ourselves about the big things in life: love, friendship, happiness, depression, death, tragedy.  Two people can be going through similar experiences on the inside, but vocalise those experiences completely differently on the outside. Sometimes they are unable to vocalise them at all. Right now, felt like a good time to write about that. The modern world puts such a premium of self-expression, on being really good at selling a version of yourself to other people in order to let them into your experience.

This often means the best holiday snaps, hottest takes, most instagrammable food and all that, but it can just as easily mean being the best at telling people about your depression, grief, stress or anxiety. By and large this is a great thing – it helps people find support networks and feel less alone in the world. But my aim with Lava was to try and dramatise how it feels when someone doesn’t have the tools to reach out to others, who has to watch on, suffering in silence as other people ask for the help they need. These people are all around us, and sometimes I feel like it’s getting harder and harder to notice them.

Has the play changed since its initial run at Nottingham Playhouse?

Not massively as far as the script goes. The initial Nottingham run was a way for us to test the idea out, so we did a lot of rewriting in the room and during the preview process. We’ll be looking at refining it a bit more I’m sure, making some of the jokes work a little better, having a look at some little moments that could have been more effective, but mostly we’re excited to leave the script alone and let our fantastic actors take it to the best possible place, which is always hard to do when I’m still changing things! I’ve learnt from experience that sometimes you can tinker with things too much. When something is working and audiences are responding to it, it’s best to listen to that and not mess around. All this means that I’m super excited about doing the play again now we know a little more about what it is, and how it works.

What are you looking forward to taking Lava out on tour?

When we did the play in Nottingham one of the things that was great to see was how different aspects of the story spoke to different people in different ways, depending on their personal contexts, so it feels like a good one to take to lots of different venues in front of lots of different audiences. Hopefully we’ll maintain that variety of response.

It’s also a play that is in part about the complicated relationship between London, where I’m from, and the rest of the country.  That relationship feels more under strain than it ever has been in my lifetime, which means that Lava is probably the play of mine that I’m most excited to take to all sorts of different places around the UK.

Why do you think this play means so much to you personally?

It’s a play in part about grief, which like lots of people, I know a bit about, but it’s also a play specifically about a young man going through an emotional crisis. While a few of my plays have taken a sort of sideways look at modern masculinity, this is the first one that has a specifically male protagonist.  In fact, now I’ve had a bit of distance from writing the play, I’m starting to realise that the two main male characters represent, in some ways, two different sides of my personality, and two different ways in which I respond to the world. That can’t help but make it feel very personal.

Also on a professional note it took me a long, long time to get the script into a half-decent place, and when something has had a tricky process I’m often a lot prouder of it getting to where it needs to be than when idea has come a bit easier. I love Lava because I so nearly couldn’t finish it, and it was only working with Fifth Word that got me through to the end. They pushed and encouraged me, and I’m so glad they did. They’ve made a beautiful, human show that despite all the serious stuff going on makes people laugh, a lot.