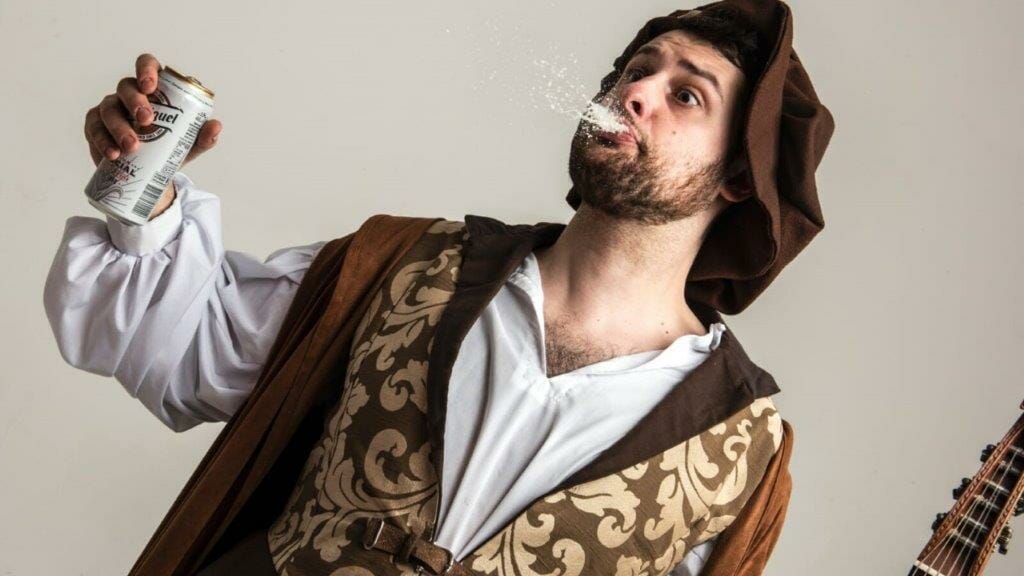 Miserly Scrooge and his classic coterie of employees, relatives and ghosts travel through time having the night of his life – past, present and future. But will Scrooge be merry before the end? Or will it be the spirits that have had too many spirits? With one genuinely drunk cast member in every performance, A Pissedmas Carol is the ultimate “You’ll never guess what happened to me last night” story.

You’re co-producing and appearing in A Pissedmas Carol at Leicester Square theatre, what can you tell us about it?

It’s going to be bloody crazy: not only are we condensing Dickens’ classic tale of the miserly Ebenezor Scrooge learning the spirit of Christmas through the visitation of three ghosts into one hour (in itself no mean feat), we are also throwing in Christmas songs, dance numbers, audience interaction, break-neck costume changes and one genuinely inebriated cast member every night. Think Christmas Panto meets Old Vic meets Night out in Soho. Think Christopher Biggins going round for round with George Best. I guarantee you will never have seen anything quite like this before.

It combines the companies of Sh!t Faced Show Time and Sh!t Faced Shakespeare for the first time, what are you looking forward to most about that?

I’m really excited at the prospect of showcasing the key strengths of both companies – combining Shit-faced Showtime’s and Shit-faced Shakespeare’s ability to tell a story and improvise through music and classical text, respectively. We’ve put a lot of talent together in one room, each actor bringing their own unique set of skills and experiences into the mix to put on one heck of a show and hopefully drawing fans of both companies into the same room for a night. Having performed for Shakespeare over the past few years and seeing what the Showtime guys are bringing to the table, it definitely makes one up their game, even if one’s (my) game consists of desperately trying to stay in tune whilst doing a lot of scowling and grunting (as the character of Scrooge, not an appraisal of my general demeanour in the rehearsal room).

What’s the best and worst thing about performing in this kind of show?

When you drop an intoxicated actor into a tale as intricately penned as a Christmas Carol, it becomes a joy to improvise around what the drunk is doing (and, more pertinently, UN-doing) because Dickens has created such beautifully detailed characters and a vivid Victorian London backdrop for the sober actors to seek refuge in, almost like a finely woven safety blanket, besmirched with a drunkard’s bodily fluids.

As aforementioned, the worst part for me would be the singing, especially in front of such accomplished singers! They’re really rather good at singing, it does my head in.

How do you decide who gets drunk each night, and is it something the cast look forward to or dread?

We draw up a rota well in advance so everyone can plan their lives a bit, i.e. not booking in a driving exam or a Bat Mitzvah the day after their drunk show. The drunks are well looked after during the drink up, we play games, listen to music, eat food – its a bit like a birthday party, except the only person drinking is the designated drunk performer for that evening. Once you get used to the weirdness of that, of course it’s something we look forward to doing – we’re getting paid to drink, what’s not to love?

How do audiences generally react?

Once the audience has worked out which actor is the drunk for the night, and that it is absolutely real, that the show is not an elaborate rouse in which we have created and rigorously rehearsed an infinite list of scenarios and multiple endings, spending hours and hours teaching actors to hone and perfect the art of pretending to be drunk without coming to the conclusion that the most time and cost effective solution would be to simply get someone actually, genuinely, DRUNK… The audience love it.

What would you say to anyone thinking of coming to see A Pissedmas Carol?

Grab a drink, get comfy, sit back and get into the spirit(s) of Christmas. Or, to put it more simply – Bar. Rum. Glug!

A Pissedmas Carol to Open at Leicester Square Theatre

Review: Neck or Nothing at The Pleasance

Silent Uproar Releasing £20,000 to Support Writers in the North of...