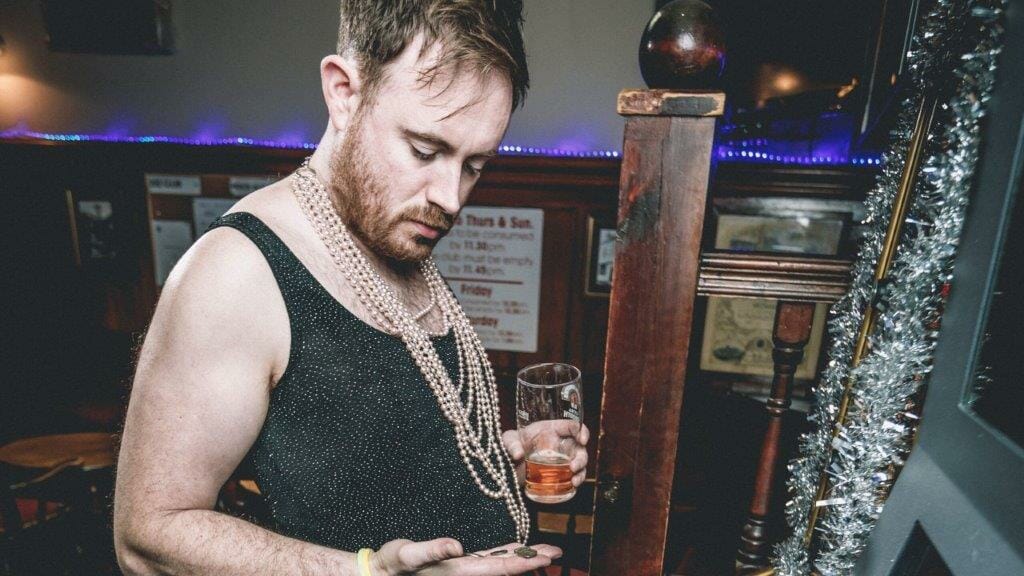 Jimmy Fairhurst directs and stars in Cinderella, an outrageous site-specific show that takes all the best of traditional British panto and tops it off with a pint. It runs at The Vaults 22nd November 2019 to 12th January 2020.

Penned by Luke Barnes (All We Ever Wanted Was Everything), this knees up of a night out brings all the characters you know, love and hate, to pull your mates, spill your pints and pour their hearts out on the karaoke. Crammed with live music, bingo, and a touch of midnight magic, Cinderella will have audiences dancing in the aisles and laughing their bloody baubles off. Think The Royle Family crossed with Elf… all set in a local boozer where the audience buy their drinks from the on-stage bar.

You’re directing and performing in Cinderella at The Vaults, what can you tell us about it?

Our Cinderella is a Wicked mother of a night out! When Luke Barnes (the writer) and I first chatted about this, we said we wanted to make something that our mates (who don’t normally go to theatre) would want to go to. So, we’ve combined panto with party and set it in a fully working pub. We toured the show around actual pubs last year in Derby, London and Salford and it went down a storm with the locals and the partnering theatre’s audiences too. Soon after we were approached by Seabright Productions to bring it to London for a full seasonal run.

The best way to explain our Cinderella is that it is an experience you’ll not forget. Not Too Tame create shows where audiences can feel involved but safe, they can interact as much or as little as they want. Like a night in any pub, the action happens all around them with a drink in hand. Our kegs will be full and the karaoke machine will be primed for those work Christmas party groups! Imagine a real-life Phoenix Nights Christmas special meets Shameless meets ELF.

What inspired you to make the concept of pub theatre so literal?

I’ve always wanted to make work for people who feel ostracised by theatre; both the building and the art form, and that tends to mean the working classes. Pubs and social clubs are where a lot of people feel comfortable, because most people have been in one, in one form or another and probably had some great times there. Noel Gallagher said ‘If you can make music, you have a duty to create it as music is the soundtrack to your life’.

I think that pubs are like that, you go there for your first pint, your first date, wedding receptions and funerals. All of life’s love, loss and laughter is spilt and soaked into the very make up of these places. Pubs are the real theatre of the working classes. They are full of high stakes drama, comedy and events with the broadest range of interesting storytellers and characters and where a great deal of people feel at home; not because of alcohol, but because of the sense of community.

Pubs and social clubs have an array of micro communities that frequent them that are also potential audiences; rugby teams, football teams, darts, snooker, pool, bingo, quizzes and theme nights etc. In some rural areas, if it wasn’t for pubs huge numbers of people, old and young wouldn’t leave the house. Loneliness is an awful thing and to think that people can die from it? Well, we want to bring people together from all walks of life to be entertained, with socially relevant work that’s professionally crafted. We know how to do ‘party theatre with a heart’ and what better story to tell than Cinderella?

What did you learn from the previous run that you’ve been able to build in to this latest production?

I suppose the biggest thing we have learned is ‘prepare for the unexpected’ as the audience are the final cast member and a different audience turns up every night. With every new audience there is new opportunity and Luke Barnes has always been brilliant at allowing us to work slight touches into the show if we find something that reveals itself to us about the story or a character in a performance. This really helps to keep things alive, fresh and unique for each show.

How do you think this Cinderella reaches different kinds of audiences?

Well, there is something here for everyone, the show itself is has all the best elements of theatre in an informal setting. There’s live music, there’s comedy, there’s some full musical numbers but then there’s some scenes that will pack a bit more punch than you’d expect from a Cinderella. This is theatre, but not as you know it. There’s something for the theatre connoisseur and the ‘I’d rather die than go to the theatre’ crew.

The cast play functional roles like serve the bar, collect the glasses, run the karaoke and we even get the ugly sisters to play the role of the ‘event planner’s’ who run the doors and guest list. This makes the whole story a bit more real. Despite the laughs, the magic and the chaos, there’s a real story underneath where a complicated family has lost someone close to them and they’re all trying to deal with things in their own way, whilst grafting and trying to keep things together. I think a lot of people can relate to the stories we tell and we just tell them through forms that are familiar to them. This is one of those random nights out in a pub that happen to be one of them best nights of your life – and everyone’s had one of those!

What do you think people will find most surprising about this production?

That it’ll be like nothing they’ve experienced in a theatre setting before. We’ve spent the last few years really getting that balance right between a good night out on the tiles and telling a good story. You’ll know the story of Cinderella, but not like this. Also, we’re properly transporting you into a pub, even though you’re stepping into the Vaults. Jen McGinley has done an incredible job creating a working pub, Luke Barnes has written the story and characters that frequent it and we bring the whole thing to life in a way you’ve never seen before.

What would you say to anyone thinking of coming to see Cinderella?

This is the best festive blow out for you and your mates; you’ll be singing in the aisles and laughing your baubles off! So, grab a pint, take a seat and get a load of this!

Main Image: Jimmy Fairhurst in Cinderella at The Vaults