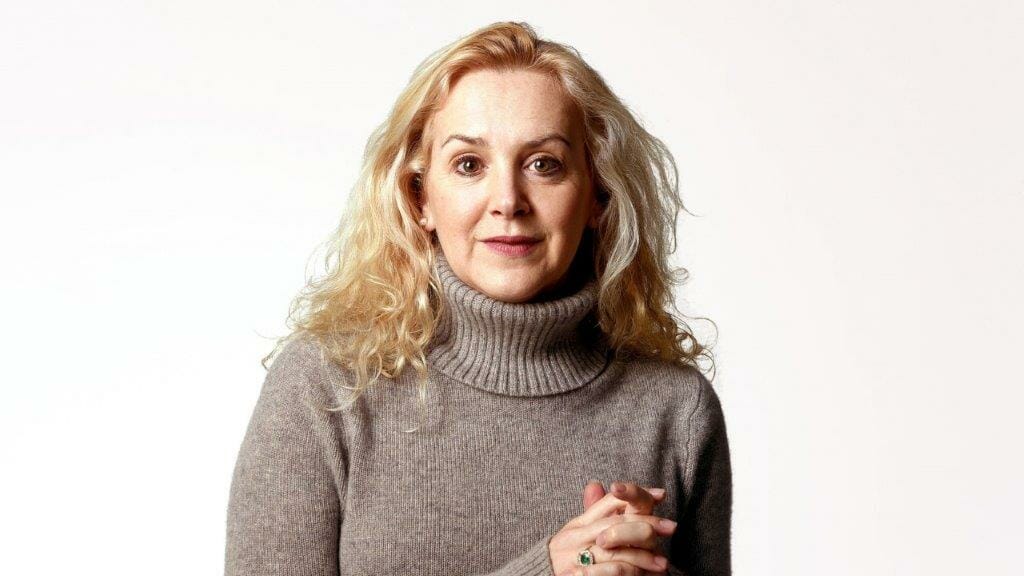 Rebecca Johnson returns to the stage with Love, Loss & Chianti, an exciting double-bill from award-winning British poet Christopher Reid. This is part of the highly anticipated relaunch of Riverside Studios in Hammersmith.

A staged adaptation of two books by Reid, Love, Loss & Chianti sees Rebecca Johnson star alongside Robert Bathurst, reprising their roles in the critically acclaimed verse comedy The Song of Lunch, as well as a premiere production of Reid’s Costa Book Award winning verse, A Scattering.

Love, Loss & Chianti is coming to Riverside Studios, what can you tell us about it?

Well, our show translates to the stage two books of poems by Christopher Reid. The first half of the show is called A Scattering – it’s a collection of poems that Christopher wrote in response to the death of his wife Lucinda Gane. Robert Bathurst takes on the voice of the poet – while I embody the memory of his late wife. The second half of the show is called The Song of Lunch. Two former lovers meet in a Soho, Italian restaurant for lunch. The reunion after fifteen years if full of fond memories until the wine takes effect! It’s funny and also somewhat close to the bone!

Christopher Reid is a poet, why do you think his writing works so well on stage?

Christopher’s writing is so accessible. I sometimes struggle with poetry that is quite oblique or self-consciously literary. Refreshingly, Christopher’s blank verse is the opposite of that. He lucidly articulates sentiments and experiences we can all relate to. You just ‘get it’ so easily and directly. These poems are also funny and sad in the perfect balance – which makes them really human. I’m such a fan of his poetry.

Tell us about Charles Peattie’s animations that feature in Love, Loss & Chianti?

Charles’ animations give a valuable added dimension to our show. First thing to say is – he’s a great talent – so the animations are beautiful, detailed, witty and clever. They enhance the performance by setting the scene, or by giving a visual representation to the action – which frees Robert and I up to be more abstract in the playing of the piece. For example – The Song  of Lunch is obviously set in an Italian restaurant – Christopher’s words and Charles’s images create that world for us. Which means that we can dispense with the idea of having a set that actually looks like a restaurant and all the endless props that would involve.

You appeared in The Song of Lunch at Edinburgh Fringe, what does the addition of The Scattering give audiences?

I think A Scattering is an obvious companion piece to The Song of Lunch. For starters it gives our audience more of Christopher’s work to listen too, which can only be a good thing. Secondly, they are interesting as counterpoints to each other. I’m discovering that certain ideas that are posed in one are then deconstructed by the other. Thirdly, the day Christopher completed A Scattering he started work on The Song of Lunch – so the latter was a natural progression from the former even in their inception. The Song of Lunch marks a change in mood, a shift in subject matter and maybe a conscious decision by the poet to embrace a new chapter of life.

It’s just you and Robert Bathurst performing this, how do you support each other ahead of a performance?

When we were performing The Song of Lunch at the Pleasance Courtyard at the Edinburgh Festival, we had some quite rough and ready dressing room facilities (as one does at the Fringe!) So, in a rather makeshift, shared space – with a screen to change behind in one corner we had lots of time to chat pre-performance. I notice this is how Robert likes to prepare – by talking about something completely different. So, he poses a question like: ‘What’s your favourite place in the world?’, ‘What’s the best meal you’ve ever eaten and where?’, ‘Favourite ever holiday?’, ‘Worst review you’ve ever had?!’, ‘And the best?’.

Before our very first performance in Edinburgh we ran the whole play for lines, whilst walking round a graveyard together!

Robert is one of the easiest actors I have ever had the good fortune to work with. He is hugely generous and he’s there for the genuine love of the work. As we both are – so I guess we’re both in a sweet spot – doing the thing we love doing, with the added bonus of really high-quality material and having fun working together at the same time.

What would you say to anyone thinking of coming to see Love, Loss & Chianti?

We’ve all loved, we’ve all lost – it’s the nature of life. There’s great comfort in realising that we’re united by these universal emotions. And maybe theatre (and poetry) is there to liberate the feelings that would otherwise lie buried and unexpressed.

There’s also a glass of Chianti waiting for you at the interval – if you like that sort of thing!

Keala Settle Gives us The Greatest Show in The Seth Concert...