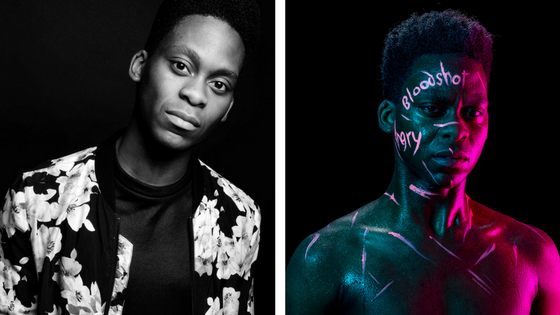 Along with Chronicles of Narnia star, Georgie Henley, they will perform the series of five gender-neutral monologues on subjects as diverse as refugees, millennial anger, and interstellar travel. All five monologues will be performed by each actor over the course of the run, but which actor performs each individual monologue will alternate night-to-night.

We sat down with Tyrone Huntley to find out more about his first non-singing role.

You’re starring in the world premiere of Philip Ridley’s Angry, what can you tell us about it?

Well, it’s a really interesting gig if I do say so myself! The play presents 6 gender neutral monologues which all have some connection to situations and themes that makes us angry! Each night, myself and Georgie will alternate which stories we tell in order to offer different perspectives on each scenario.

I’d been looking to do a play without songs for a while so when the breakdown for the role in Angry was released my very excited agent called me and asked if I was interested in auditioning for what he described as a really cool project that would involve no singing and the chance to premiere a brand new Philip Ridley play. After reading the epic script, I was skeptical at first because I’d been in a lot of auditions for smaller roles in other plays and not got very far so I didn’t think there’d be much point of me going in! My agent insisted that I at least give it a go and so I did! I auditioned for the director a few times over the course of two or three weeks where we worskshopped some extracts from the play and then after about a week of deliberations they offered me the job!

What is it you like most about Philip Ridley’s writing?

He manages to explore the human condition in such a way that doesn’t preach but still manages to provoke the audience to question the world we’re living in. As an actor I’m grateful that his characters are incredibly relatable, his words flow instinctually and his use of language is natural as if transcribed verbatim.

What are you most looking forward to about working with your co-star?

I’ve only met Georgie a couple of times doing promo for the play but her lovely, positive energy has already made an impression. This play will be a professional first for both of us so it’s great to know that we have each other’s backs!

What’s the biggest challenge in a production like this, where you alternate roles each night?

I think once we start it will be fine but I’m a creature of habit and I’m used to doing the same show every night for months so the anticipation of having to switch around daily is pretty daunting. Also, the prospect of having to know every single word of the play inside out is scary.

Which of the five monologues in Angry are you most looking forward to performing and why?

The monologue I most identify with is ‘Okay’. I can really relate to the pain of procrastination and how infuriating it is when your brain makes the decision to do something but your body just won’t play ball. At this point though I would probably have to say that the opening, titular monologue ‘Angry’ will be the most fun to perform because I can really let go during it!

Are there any characters you’ve portrayed previously you could see having a monologue in Angry?

I’d say the majority of the characters I’ve played could have Angry monologues! CC from Dreamgirls would talk about how he was manipulated into betraying his sister, Gator from Memphis would talk about the racist murder of his father and pretty much all of Judas’ songs in Jesus Christ Superstar could be easily adapted into additions to the Angry script.

What makes you angry?

Many things. Many, many things. I think number one on my list would be not getting my own way! In addition to the infuriating challenges to my political ideals, this could also mean anything from not getting a seat on the tube to not winning £100 million on the Lottery.